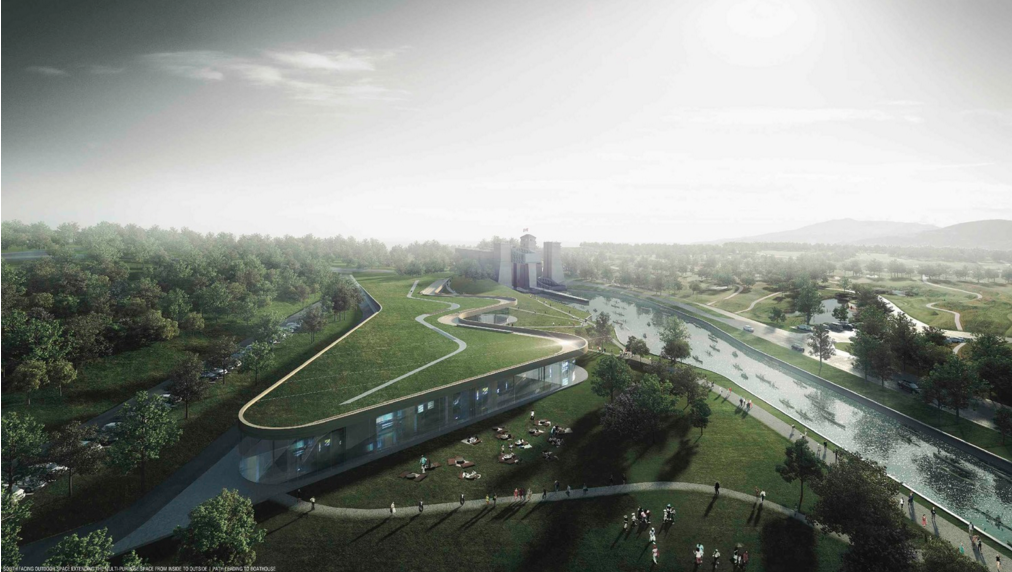 Heneghan Peng Architects and Kearns Mancini Architects of Toronto have won the international competition for the new $45-million Canadian Canoe Museum to be located at the majestic site of the 1904 Peterborough Lift Lock National Historic Site.

An elegant, serpentine glass pavilion graced by a two-acre rooftop garden has been selected as the winning design in the two-stage international competition. The design to house the world’s largest collection of canoes and kayaks presents a Canadian game changer that organically and boldly curves out from the drumlins beside the Trent-Severn waterway. Envisioned with and for the community, the museum embraces aboriginal wisdom to live and build lightly on the land.

The Irish-Canadian design team brings to the Canadian Canoe Museum its rich experience in the design of high-profile museums and visitor centers in Toronto and around the world. Heneghan peng’s competition-winning Grand Egyptian Museum is currently being constructed in Giza, Egypt at the foot of the Pyramids. Their stunning Giant’s Causeway Visitors’ Center in Northern Ireland folds its dramatic geometry into the hill above unique basalt stone cliffs at a World Heritage Site. Kearns Mancini Architects work includes dynamic university buildings in Canada as well as the award-winning Fort York Visitor Centre, with Patkau Architects, that inserts a powerful Cor-ten steel and glass volume below the Gardiner Expressway in Toronto.

The heneghan peng submission stood apart from the other submissions as the design works organically with the land rather than overwhelming it. In an era of climate change, its intelligence on sustainability impressed the design jury in many ways, not only for its geothermal heating/cooling and reduced energy costs. The embedded design has inherently lower operating costs with only the east and south glass walls exposed to the elements. Inside, the 80,000-square-foot single floor design offers a flexible floor plate, allowing the Museum to adapt to changing expectations and technology over time through the ability to reconfigure the Museum experience and offerings by changing internal partitions.

The organically-shaped volume banded on its top edge with local hardwood is embedded within the site’s drumlins, allowing the museum’s light-sensitive collections of historic birch bark canoes that date back to the 1780s and aboriginal artefacts to enjoy energy-passive, naturally dark spaces. The museum’s stunning two-acre green roof will provide the community with the possibility of creating edible gardens, native flower pollinators and aboriginal three sister plantings while facilitating efficient management of storm water and fantastic views to the Lift Lock.

“The design looks forward to the importance of sustainability, respect and responsibility as we move forward as a Nation to the Sesquicentennial in 2017, and beyond,” says Richard Tucker, executive director of the Canadian Canoe Museum. “The design speaks to the importance of the contents, programming and messages conveyed by the Canadian Canoe Museum and its craft to all Canadians.”

Short-listed teams submitted their schemes mid-August, 2015. As an enhancement to the rigorous review by the Architect Selection Committee, the submissions underwent a dynamic and instructive community engagement which included a popular public presentation by the competing architects in September at the existing Canadian Canoe Museum, as well as on-line media polls, emails, and letters.

The firms selected for the Stage 2 Limited Design Competition were:

There will be a public presentation of the award of the contract to Heneghan peng Kearns Mancini team held at the Canadian Canoe Museum at a date to be announced. We encourage the public, volunteers, members and staff to come out and meet the design team and share their aspirations for new programming at the Museum.