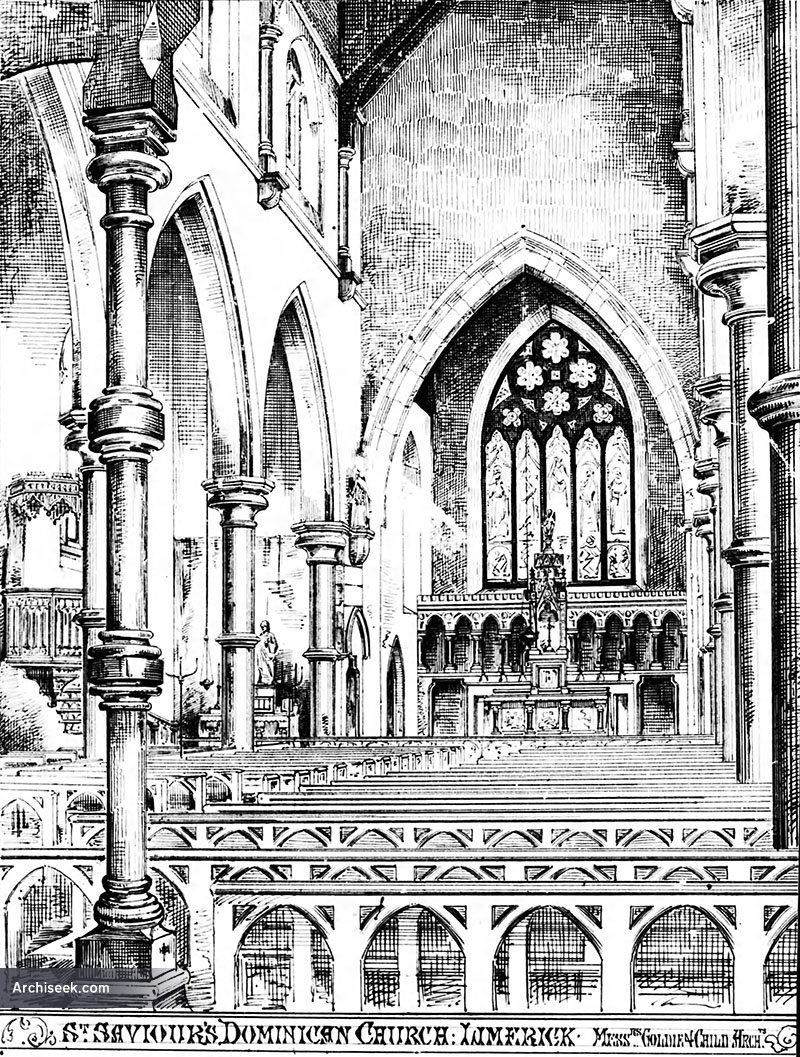 St Saviour’s Dominican Church as it stands today is the result of the work of many architects over two hundred years. Originally the church was constructed around 1816 to designs by James Pain. It was later extended by William Wallace who heightened the exterior and interior by 20 feet with the addition of a clerestory and rose window in the early 1860s. In the later half of the 1860s, George Goldie designed a new chancel, high altar, reredos, tabernacle and east window. In 1870 Goldie and Child remodelled the interior and exterior and the work was supervised by Maurice Alphonsus Hennessy, CE, Limerick. Illustration published in The Irish Builder, December 15 1870.

“THIS sacred edifice (of which we give an interior view with this number) was re-opened on the 13th ult. for divine worship. It has been completely remodelled, from plans by, and under the direction of, Messrs. Goldie and Child, architects, of London. We print nearly verbatim an account furnished to us by a valued correspondent and subscriber:— For several months past, works of an important character have been in progress at this building, and the result has been the production of a church which reflects the highest credit on all concerned in the under taking—one of considerable difficulty, and at first beset with obstacles. Few, indeed, who remember the old squat, weather-beaten exterior, with its incongruous battlements and pinnacles, could recognise through the wonderful metamorphosis wrought on it the beautiful proportions and picturesque outline of the present façade, with its lofty pointed centre gable, pierced with an elaborate rose window, and decorated with statue niches; its dependant sloping half gables, cut off and flanked by buttresses, which are carried up and terminated by massive yet graceful pinnacles, which give the entire front a finished and recherché appearance.

It is, however, on entering the building that one whose memory had been familiar with the old lank wooden uprights that did duty for columns, and stayed the plain, flat, gloomy, overhanging ceiling, that rested, as it were, on the apex of the chancel arch at one end (dwarfing its beautiful proportions) and swamped the organ at the other; then the large awkward gallery and its bulks of staircases, that darkened so much the west end of church, and the unsuitable arrangement of the floor, particularly that portion frequented by the poorer classes;—it is to one, then, who can remember or imagine all this, that the streaming light now falling on the beautiful and costly materials, and dis playing in its varied depths of light and shade the elegant and chaste proportions of the present interior, that its production from the old building seems truly marvelous — so has been produced. A most unique, light, much so, that it is some moments before one draws near to examine those massive and matchless gleaming Aberdeen red granite columns which support the arcade, and divide the church into nave and aisles. They are each of two single pieces, resting on a molded base of Portland stone, which overlays an octagonal block of pure white native lime stone; then at mid-height an ornamental band is introduced, and crowning all is an elaborately-molded cap, also of Portland stone. From off this cap—at either side making five bays—spring the gracefully molded arches of the arcade, over the apices of which are the clerestory windows—simple coupled lights deeply recessed, with light pointed drop-arches in front. From the foot of those windows, sloping downwards and outwards, are the aisle roofs, whose graceful design, curved ribbed principals resting on corbels, the entire surface being sheeted over, and without substantially slated, whilst within it is broken up into panels, whose rich and warm tone produced by its permanent oil stain, and the cathedral proportions of those side chapels, make them a study in themselves, and well worthy of the universal admiration they have exacted. But the nave roof is the chef d’aeuvre, and one must see before he can appreciate those slender columns, resting on corbelled bases, and supporting molded caps, from off which spring the legs and curved ribs of the main trusses; then the intermediate principals and massive purlins break up the open sheeted surface, as in aisle roofs; and the delighted eye, as it gradually steals up to the distant apex—now deepened in shade,— is lost in the solemn and thrilling effect which and elegant organ tribune of wrought and stained and varnished red pine, supported by pierced and carved oak columns, happily re places the old gallery before alluded to, and occupies such little space at the west end of church as not to interfere with a single feature of the interior, but, on the contrary, adds much by its beauty. On this the grand old organ is fixed, whose rich tones are now heard to so much advantage. Then, above and beyond all, one is struck by the internal appearance of the rose window (which develops in its tracery a cross, the angular and other spaces being filled up with trefoils, quatre foils, &c.), which so appropriately lights and furnishes that intermediate storey. In the corresponding space between the apex of chancel arch and framing of roof, preparation has been made for the introduction of rood figures, which will tend considerably to enliven this portion of the church. Evident care has been bestowed on the arrangement of the seats, &c. Now the principal entrance is by the great west doorway, which opens on the uninterrupted sweeping nave, the beautiful encaustic tiled passage through which leads direct to the communion rail; and then at either side are the benches or seats. The aisles are similarly treated, the passages being along side walls, by which means the greatest amount of accommodation is obtained, and a simplicity of access established, which is so essential in all public buildings.

The acoustic properties of the church are very perfect, as also the ventilation. In the north aisle a large radiating stove has been erected. Thus much has been accomplished; but, in order to give the last stroke to this already beautiful church, the erection of a triple porch advancing some 14 ft. or 15 ft. in front, is deemed a matter of necessity.

We understand that the greatest meed of praise in carrying out this noble undertaking is due to the Very Rev. J. Carbery, Prior of the Dominican Order, under whose charge the religious establishment connected there with is maintained. We are glad to hear that all liabilities so far are cleared off—much to the credit of Limerick.

Mr. M. A. Hennessy, C.E., of Upper Mallow-street, Limerick, had the entire supervision of the works from their commencement until their satisfactory completion by the contractors, Messrs. McCarthy and Guerin”