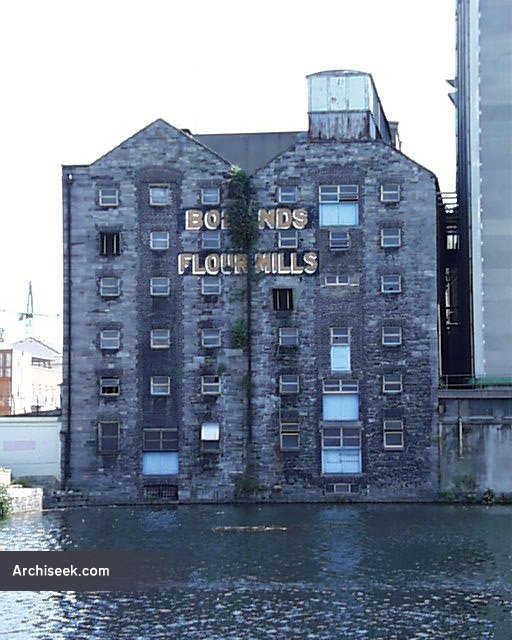 Former mill building, part of the large Boland’s milling complex. The remainder of the complex has been demolished for redevelopment. The two six-storey stone warehouse buildings date from the 1830s. The majority of the complex consisted of concrete silos built between the 1940s and 1960s. 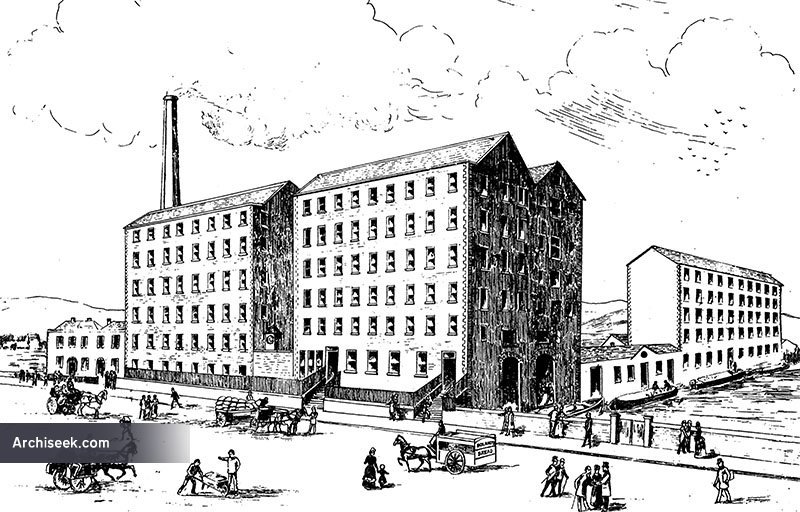 A description of the mills in 1888 – “The building of these mills dates about forty years back, by Messrs. Pim, and were equipped by them with every convenience the lavish outlay of money could procure. When these mills were taken over by Mr. Patrick Boland in 1873, they were worked by 23 pairs of stones, to which number he added 18 more pairs, thus bringing the total to 41, and rendering the establishment one of the largest in the country. In 1880 the management became convinced of the necessity of adopting a modern method of grinding. Mr. J. H. Carter, a milling engineer, then, rapidly coming to the front rank, was in consequence commissioned to supply a complete plant of his roller system, to replace 23 pairs of stones, which were thus displaced for the newcomers. This being the first installation of this system in the United Kingdom, this plant became the pioneer of Carter’s system in these countries.”

“The basement of the mill, which is interesting—very interesting from a safe distance—is entirely given up to the shafting and pulleys, by which the machinery is worked. The ground floor and all the upper floors (of which there are five) are labyrinths of rollers, scalpers, wheat-graders, centrifugals, worm-tables, sifters, and dust collectors.”

“Passing through the boiler-house, we find ourselves in the engine-room. Our attention is first arrested hereby a large condensing beam engine, 150 h.p., supplied by Messrs. Fairbairn in 1846; it has a 6 ft. stroke, and a huge flywheel 28 ft. in diameter. This engine furnishes all the power required in the millstone mill. The power required to drive the roller plant is derived from a magnificent coupled horizontal condensing engine of 200 indicated h.p.; this was also supplied by Messrs. Fairbairn, and brings up the effective motive force of the establishment to 350 h.p.”