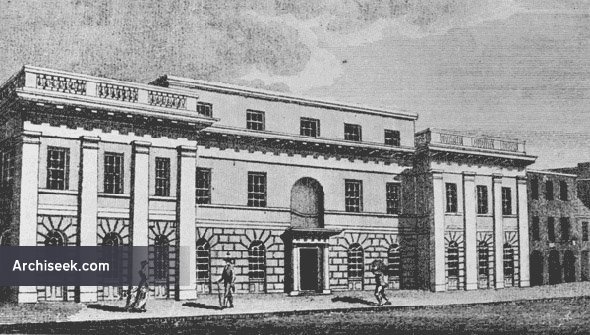 In 1796 the Dublin Society moved from their building on Grafton Street, to Hawkins Street where they already had their “Repository.” The Society having taken additional ground, erected a large building on the site afterwards occupied by the Theatre Royal of 1821. The building was probably by Baker with work done on the drawing school rooms by Edward Parke who was the Society’s architect.

In this building rooms were provided for the drawing schools and for the exhibition of pictures. According to Walter Strickland’s History of Irish Artists, “The arrangements connected with the drawing school, would have been, when finished, very complete, particularly the Bust Gallery and Exhibition Rooms. The former is ninety-one feet in length and thirty feet wide; and the latter sixty-seven by twenty-nine, and both are twenty-five feet in height, and lighted from the roof. The Exhibition Room has one continued upright lanthorn in the centre of the ceiling, which from thence is wood, and terminates in a stucco cornice. It was contrived by Mr. Baker, the superintendent of the School of Architecture, and is, next the Louvre, perhaps the finest exhibition room in Europe.” Off the bust room was the drawing school, an apartment thirty feet square, lighted from the roof.

The Society continued to extend their Hawkins Street premises, until in 1814, they purchased Leinster House from the Duke of Leinster, and in 1815, when the necessary alterations had been made, they moved again. The statue of Hibernia by Edward Smyth which was sited over the entrance on Hawkins Street was moved to the top of the gateway to Leinster House. In 1820 the Society became “Royal,” under an autograph letter of George IV.