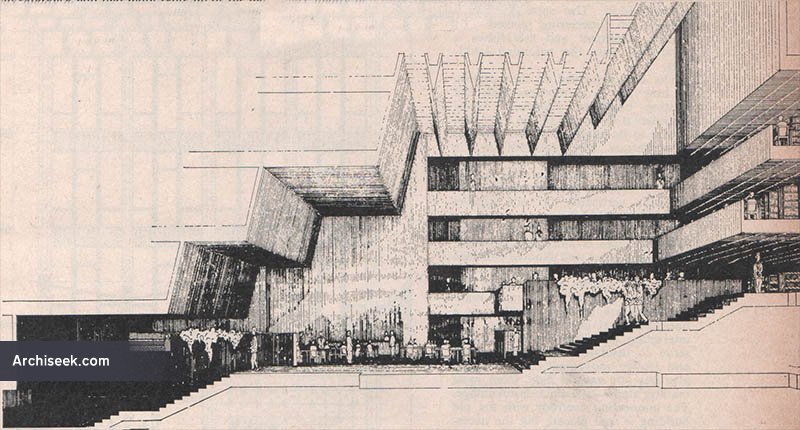 Designed in association with John Mesick, Thomas Ovington, and Lewis Zurlo. The main feature of this design from the United States was the large centralized space – designed to be a flowing space that progresses from the low, dark entrance hall, upwards through the reference area and main reading room to culminate in a central atrium space.

“No.89, which is placed third, is the most original and imaginative of the competition entries. Although its faults are as positive as its virtues, the Jury agreed that it deserves more than commendation. The handling of the internal spaces is impressive, and there is no doubt that it would be a building which people would come far to see.

In contrast with most of the other designs, the building has massive load-bearing walls facing onto the Fellows’ Garden and the College Park. The east and west elevations cpse the vista in a highly dramatic, almost Piranesian fashion. The north and south facades are curtain walls of grey plate glass which would reflect the trees and surrounding buildings. The perspective drawings realistically illustrates the interesting feature of the design. But the Jury has some doubt as to whether the administrative staff would be happy behind such a north-facing curtain wall.

The siting is clever to the point of daring. Access is clear and direct for both goods and readers. Internally the planning and progression of levels in section is equally dramatic, but the drama is overpowering and the atmosphere generated is claustrophobic for a library.”

The structural system employed (long-span precast post-tensioned tee-beams) and the air conditioning system (by air circulated through the wall and floor cells) are again highly original for this type of building.

The design has a major defect in terms of library use. By means of a grand central staircase readers most ascent 20ft. to the general reading room level. In so doing they pass, at first floor level, the readers who are seated at the reading tables in the reference area. This high density traffic would be most undesirable.

In general, the drawback of the building as a working library (as opposed to its virtues as architecture) have prevented it from achieving a higher award.”