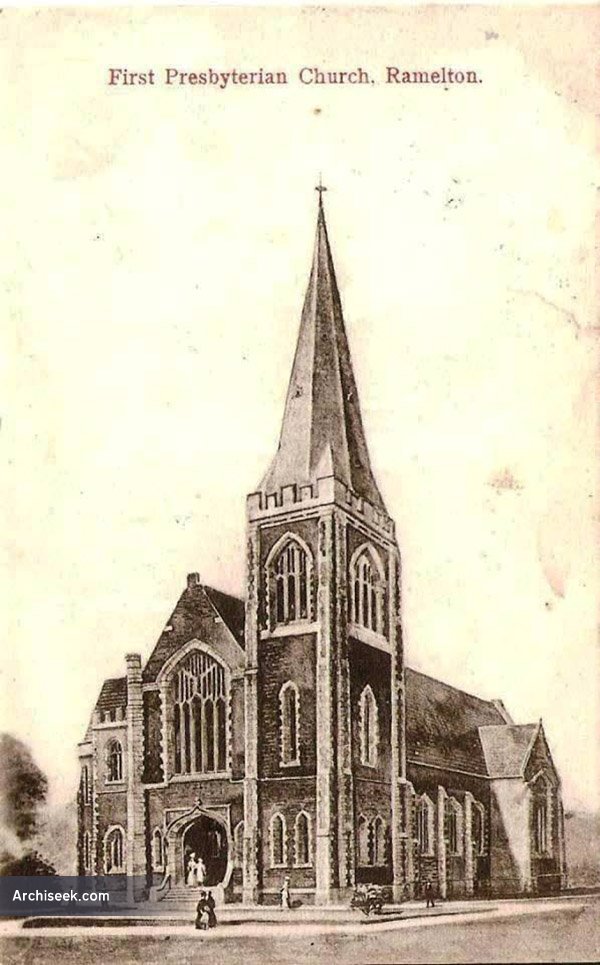 In February 1905 the congregation’s Building Committee contacted Young & Mackenzie Architects to consider designing a church building seating from 550 to 700 people. Young & Mackenzie were a prominent Belfast firm during the second half of the nineteenth century and early twentieth century John Mackenzie became the building project’s architect and made many visits to Ramelton while the church building was under construction.

According to their congegational history: “By May 1905 the Architects had supplied drawings for a new church and they were approved and accepted by the church Building Committee. In July Mr. Mackenzie estimated the completed church would cost £5,807 or £4,616 without the belfry and spire. The Building Committee was enraged and requested the secretary to write a letter to Messrs. Young & Mackenzie requesting to know why the church could not be built for £4,000 which was the verbal amount given by the architect on an earlier occasion.” Eventually after some extra fundraising, extra funds were collected, including some from the United States, and the church as designed constructed.

Described upon completion in late 1907: “The architecture of the church is a simple treatment of the late Tudor style and the walls has mainly been constructed of an excellent local stone with dressings of Dumfries red sandstone. All the bricks used were specially brought from Messrs. Laverty’s works at Carrickfergus. A special feature has been made of the bell tower which is 20-ft. square with embattled parapets and gargoyles, above which rises an octagonal stone spire surmounted by a copper-guilt vane at a height of 120 ft.”

“The main entrance, placed in the centre of the west gable, gives access to a spacious vestibule, flanked by the circular staircase. The dimensions of the church are about 90 ft. long by 70 ft. wide at transepts. There is seating accommodation for upwards of 500 persons, and the gallery, which extends over the vestibule for 80 persons additional. Above the boldly moulded arch of the main door is placed a five-light, richly traceried window with label moulding. Each of the transepts has four-light windows and numerous tracery windows in the aisles afford ample light and ventilation. The windows in the east gable are of special design in which appropriate texts are combined with Biblical plants. The central wheel window (Rose Window) is the gift of the Architects.”