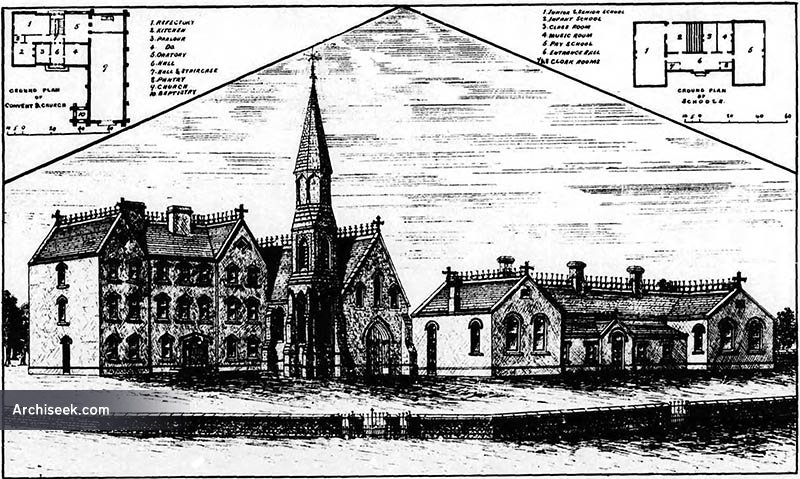 Although the convent building and school were constructed largely as illustrated – the church was not. A miners hut from the Bunmahon Mines was transferred to the site and erected as a temporary Convent church. In the 1990s the school was demolished, and a new, rather soulless church built on the site using the same external form incorporating three walls of the old school building.

Published in The Irish Builder, September 1 1880. “The convent, church and schools, of which we present a view and plan, are in course of erection on a piece of ground lying between the Waterford, Dungarvan, and Lismore Railway, close to the Kilmacthomas Railway Station and the public road leading from Dungarvan to Waterford. The peope of Kilmacthomas are indebted to the generosity of the Marquis of Waterford for the site of the above; to the indefatigable exertions of the Bishop of Waterford, the Rev. Father Hearn, Waterford, and to the co-operation of the Sisters of Mercy of Kilmacthomas and Cappoquin for the erection of the above buildings.

The schools, which are now finished and at full work, form the western end of the block and one storey in height, and of 90ft. frontage, the principal entrance facing the north. They are built of a fine description of local brown stone, and comprise large entrance hall, junior and senior school, 40ft. by 18ft.; pay school, 40ft. by 18ft.; infant school, 25ft by 18ft.; music room, 18ft. by 10ft.; classroom, 18ft. by 10ft.; and two cloak rooms. They afford accommodation in all for 300 children. The schools have open roofs neatly constructed in pitch pine.

Immediately adjoining the schools will be the church (Gothic in design), which has not as yet been commenced, and which is intended for the use of the public as well as for the inmates of the convent and schools. It will be 75ft. long by 24ft. wide and will afford sitting accommodation for 350 persons. It also is intended to be built of the local stone, with limestone dressings, having a spire 80ft. high in which it is intended to locate the baptistry and belfry. It will be seen that the church is intended to form the connecting link between the schools and the convent on its eastern side, and with which it communicates directly. The convent is 55ft. long by 37ft. wide, and is now in course of erection, having two entrances north and south, the northern facing the public road same as school, and the southern overlooking the railway. It will afford accommodation for thirteen nuns, and has on the ground floor large entrance hall and staircase, two reception parlours, refectory, kitchen, pantry &c., as well as an oratory, which opens into the church by means of three Gothic arches, supported on limestone columns with carved heads, &c. On the second and third floors are the community room, noviciate cells, bath-rooms and infirmary. The inmates of the latter are enabled, by the introduction of a window opening into the church, to assist as the devotions in same.

A lodge and entrance gate will also be built at the western angle of the convent ground, from which there will be a carriage drive to the southern entrance of convent. Great care and attention has been devoted to ventilation, water-supply ad drainage.

The estimates cost of the buildings when completes will be about £3,000, which is being supplied by subscriptions. The architect is Mr. M.T> O’Keefe. M.I.C.E.I., Cork. The contractor for the schools was Mr. Edward Shimmick, Cork, and for the convent, Mr.s Thomas Flynn, Waterford.”