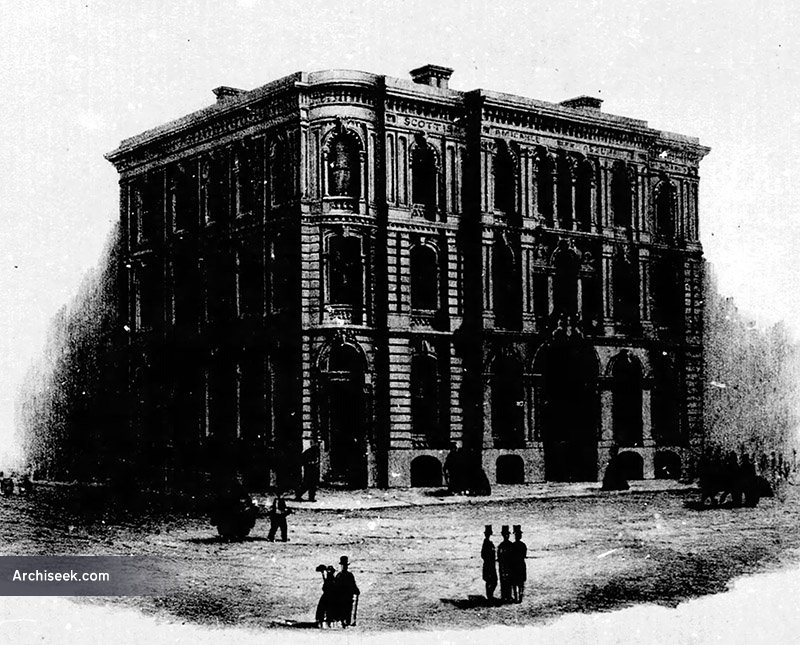 Unlike many buildings of this era in Belfast, this is still standing today although much altered inside. onstructed started in the first half of 1863.

Described in The Northern Whig as “situated on the ground hitherto vacant at the corner of Waring-street and Victoria-street, adjacent to the Northern Bank. They will form a square of about 75 feet and have fronts on three streets – on Victoria-street, on Waring-street, and on the new street [Ulster Street] from Victoria-street to the steps of the Custom House. They will also contain several suites of chambers for mercantile purposes, and these will be of great vale, both from their situation and construction. According to the plans, the style of the contemplated buildings in Italian. The height will be about 85 feet, consisting of three storeys and a basement. The basement will be of rough blue limestone, rising about 5 feet from the level of the pavement. The front will be in Victoria-street and the chief projection in which is the entrance to the offices of the society, is 31 feet. The entrance is then recessed 3 feet 6 inches, and upon each side of this recess it stretches for about 12 feet. Bold cared corners carry back the front a depth of about 12 feet from Victoria-street, and in each of these curves the building goes back on Waring-street, and on the new street before mentioned, some 63 feet, and in each of these wings is an entrance to the suites of offices upstairs. The entire front ill be of the best Dungannon stone, and on the wings Dungannon stone will be mainly used. The pilasters on the second and third storeys of the wings will be of the best white brick, manufactured by Messrs. Allan and Mann, of Glasgow. The entire building is to be fire-proof, and the stone staircases will exclusively be used throughout – an appropriate example for an Insurance Company to set.

Entering by a handsome doorway in Victoria-street, a wide hall leads into the general office, which is a spacious apartment lighted by a dome. Off this are cash offices, and running parallel with the hall, and on each side of it are two rooms, one to be used as a board-room ad medical officers’ room, and the other as the private office of the secretaries. From the cash office, a staircase leads to the basement, where will be the safes of the society, &c. The only means of heating to be used is the good old plan of fire-places which are liberally distributed throughout the entire building.”