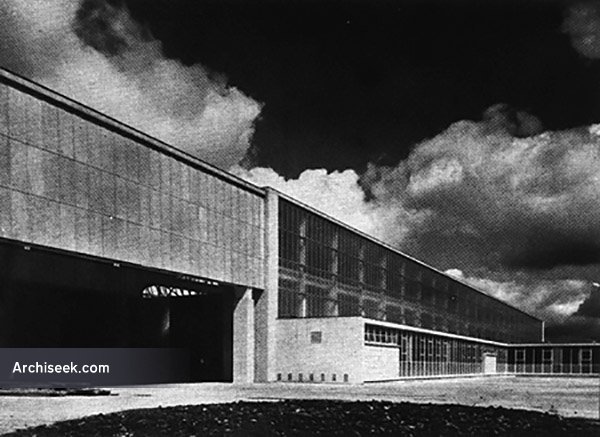 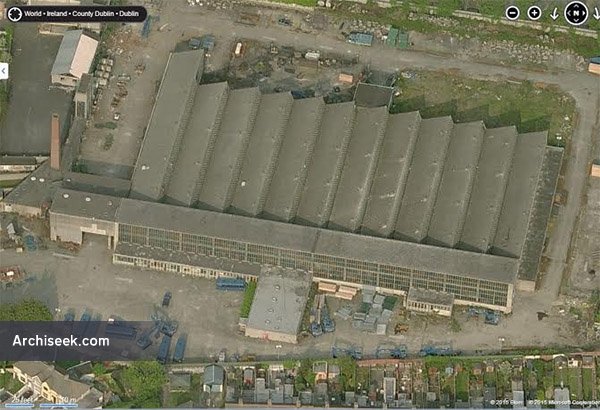 In the late 1940’s Michael Scott became involved with Córas Iompair Éireann (CIE) the National Transport Company which came into being on the 1 January 1945 as a result of the Transport Act of 8 December 1944. Scott generously passed on many of the commissions to promising architects, remaining as CIE’s Consultant Architect. Scott’s role as consultant architect meant that he passed all final drawings and designs for the various projects. However he kept the Dublin Bus Station and other key projects for his own practice.

The first of these was the Inchicore Chassis Works designed for the production of bus and lorry parts. The complex contained offices for administration and production as well as accommodation for manufacturing and testing. For the main factory, it was considered that a space of 330 feet by 150 feet with one central row of columns at 30 feet centres would allow a degree of flexibility in the layout of plant as needs changed. A crane bay was placed on the east side allowing the west side to be extended if the need arose. The building was very much planned around flexibility and extendibility – all to no avail in the end.

Externally it was one of the most modern factories in Ireland with large areas of vertical patent glazing in the factory space and continuous steel windows from floor to ceiling for the offices. At the RIAI, it was suggested that it should be the winner of the Gold Medal for the period, but the committee led by Raymond McGrath (1903-1977) decided that, as Scott was obviously going to win it with Busáras, it should go to someone else. So Alan Hope (1907-1965) won with the Aspro factory, Naas Road, Dublin (Walker, 1995, p. 123). This of course is Scott’s story, as he then goes on to belittle the quality of Hope’s work, so this may or may not be true. As soon as the building was completed however, a debate arose on what to do with it – CIE’s financial problems would not allow them to begin producing vehicles. It was used as stores for several years and then sold on – its original function for CIE never realised