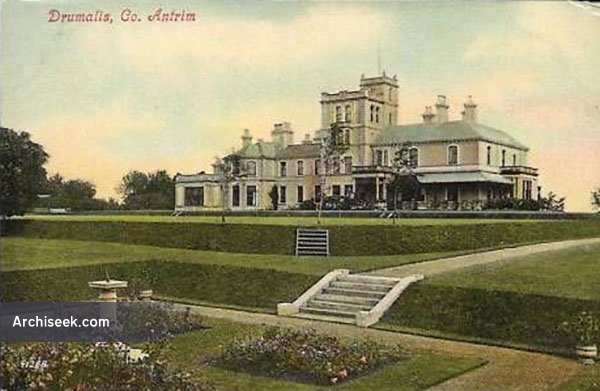 In the 1880s, the architect Samuel Patrick Close extended a compact Victorian villa of around 1870 into a large rambling composition in an Italianate style for Sir Hugh Houston Smiley. More striking is the interior work of George Walton. Walton (1867 – 1833) was a Glasgow contemporary of Charles Rennie Mackintosh and he produced the detail of the house – it is said that no two doorhandles in Drumalis are exactly the same. Its gorgeous red and green stained glass inscribes the linkage of Scotland and Ireland in the Kerr/Smiley marriage in lines of poetry written in the windows and images of the red hand of Ulster and the thistles of Scotland.

There is scholarly interest in the house as the most complete “company job” undertaken in Walton’s early period and because the little wooden fitted cabinet in one of the front sitting rooms of Drumalis, with its secret drawers, is the only surviving piece of furniture attributable to Walton from before 1896 which can be confidently dated. Drumalis is now a retreat centre owned and managed by the Sisters of the Cross and Passion.