1882 – Church of the Holy Trinity, Seapatrick, Banbridge, Co. Down 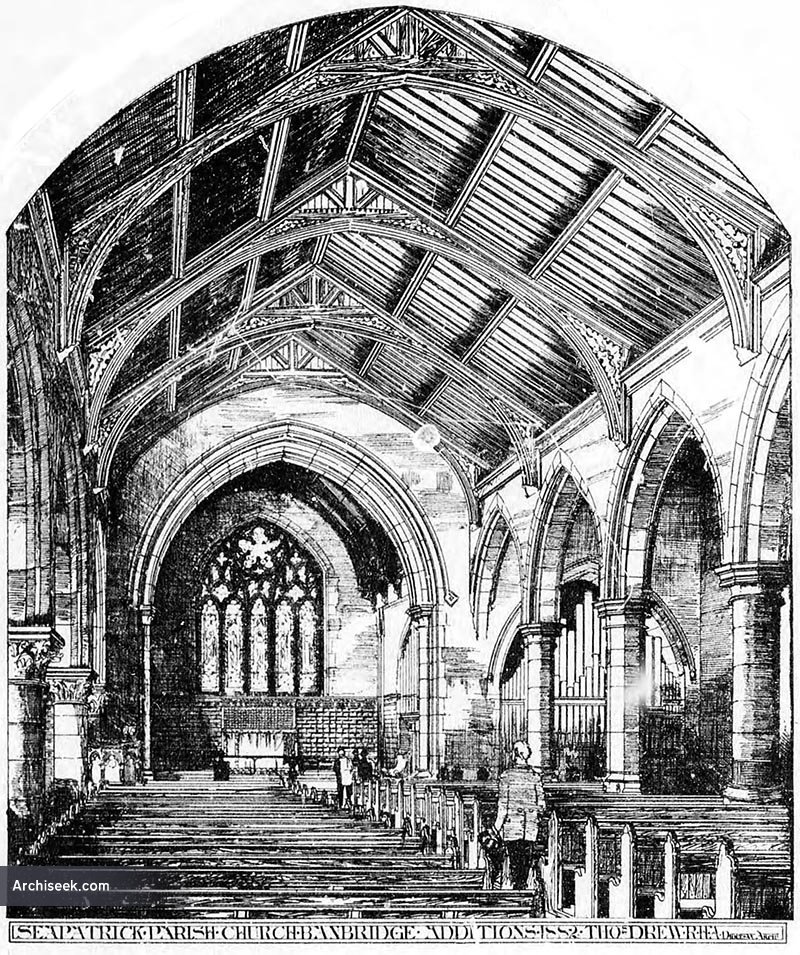 Seapatrick Parish can trace its history back to the 5th century when tradition has it that St Patrick camped overnight to rest on his journey from Downpatrick to Armagh. Christian worship has been offered in the area since then, and in 1837 the church in the village of Seapatrick was built, with Holy Trinity being built in 1882. This was the complete rebuilding of an earlier church of 1837 by William Farrell with subsequent additions by Joseph Kirk, William J. Barre, and Sir Thomas Drew.

The name Seapatrick is a compilation of Suide Padruic meaning seat or resting place of Patrick and tradition suggests St Patrick paid regular visits, possibly as he journeyed between Saul or Downpatrick and Armagh. Seapatrick Village itself is now really a suburb of Banbridge.

“This church, one of considerable size, built only about forty years ago in the Carpenter’s Gothic style of that period has now undergone so many restorations hat only a few yards of masonry of one transept, and the tower and spire remains of the original work. It was at first a wide barn-like structure with a flat-pitched roof open to the ridge and plastered, but having cast-iron principals of the early railway shed type of that period. About 1864, extensive additions were made, Mr. W.J. Barre being the architect, but under the controlling hand of the late Ecclesiastical Commissioners. One transept was removed and a double transept or aisle of unusual depth,, as long as the church itself was run out on one side. A chancel of small size and unsatisfactory proportions and detail was also added. This aisle has now been pulled down, and a more spacious and well-proportioned one and a large organ-chamber built, and a new south aisle has been also added for the whole length of the church; thus removing every trace of the original church walls. It has been subsequently decided to give it a new roof somewhat on the lines of the old one, and the building is this represented in the interior view we have published.

Still more recently, however it has been decided to raise the roof an additional 6ft., giving it a low clerestory. The effect has been to alter the whole church into the aspect of a new one of considerable proportion and dignity. To harmonise the style with the flat-pitched roof and Mr. Barre’s aisles, and to give the maximum of light from he two aisle walls, Perpendicular style of treatment has been adopted throughout the new work. The tower and spire, although debased in details, are graceful and well-proportioned. It is proposed to improve some of their features and by a subscription, raised chiefly among the Roman Catholics and members of other religious denominations in the town, to adorn the tower and place a clock in it. The choir will be seated in oak stalls, and a new organ to be built for it. The tower will be open to the church by a lofty arch, and a ringers gallery will be a feature of the west end.

Messrs. Bacon and Co., have a contract for heating the whole church upon their small-pipe system. A handsome pulpit and font by Mr. Sharpe of Great Brunswick-street, are already in the church, and a costly brass eagle lectern is being presented. The chancel tiling will be by Craven, Dunnill, and Co., and many other details and fittings are in hands or contemplated, with which the church promises to be one of the best-appointed in the diocese, and serve the purpose of a central place of meeting for united choirs. Messrs. Dixon and Co. of Belfast are contractors for the mason works, the cost of which will amount to about £3,000. Mr. Thomas Drew, R.H.A., Diocesan Architect has designed and carried out the present works.” Published in The Irish Builder, January 1 1883.