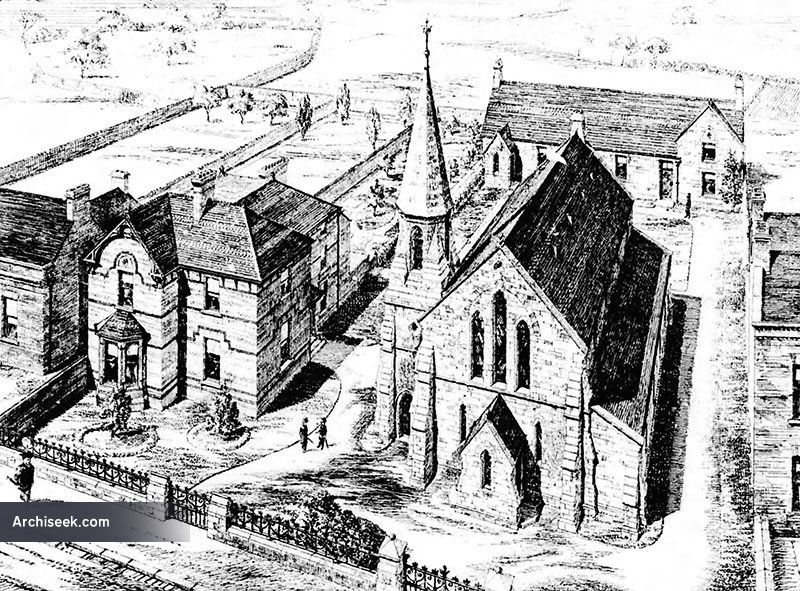 Built over ten years by two architects – the chapel of 1872-74 by Thomas Holbrook; and the manse and school of 1880 by William Stirling. The illustration is from Stirling’s practice, and shows the church with its spire (which had not at that time been completed) and an unrealised porch. The interior of the church has cast-iron arcades dividing the nave from the aisles and some fine stained glass in a later pre-Raphaelite style. The church was extended by addition of transepts in 1924.

The Irish Builder, in February 1874, reported on the building of the church that, “The foundation-stone of a church for the Wesleyan Methodist body was laid on Thursday last, at Brighton-road, Rathgar. It will be in the Early English style, and comprise a nave and two aisles, with a handsome tower fronting the road. The roof will be open timbered, and, as also the benches and fittings, will be of pine, stained and varnished. The design is by Mr. Thomas Holbrook, C.E., and Messrs. J. and W. Beckett are the contractors.”

“Last year, the committee having procured the requisite funds, invited designs in competition for the manse, school-house, spire, porch , and front enclosure. Those submitted by Mr. William Stirling, architect of 107 St. Stephen’s-green West, Dublin, were selected and the works are now being completed under his supervision.” Published in The Irish Builder, May 1 1880.