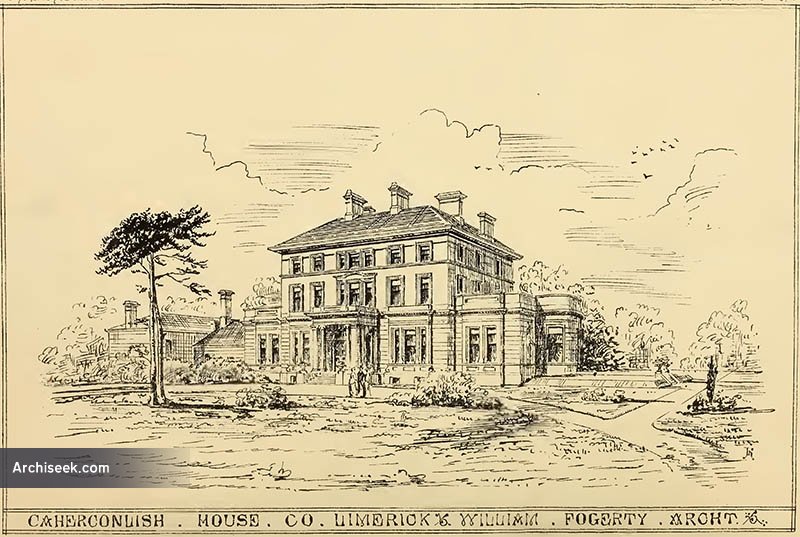 Lewis describes this house in the following terms “Near the town stands Cahirconlish House, a handsome modern residence, erected near the site of the old family mansion, by the proprietor, Major Wm Wilson.” The Ordnance Survey Name Book dates this house to about 1789 and it was three storeys high.

The Irish Builder describes it with this illustration in 1872: “We give this week an illustration of Caherconlish House, county Limerick, the property of Mrs. Gabbet, which has recently undergone extensive alterations and additions, from the designs of Mr. W. Fogerty, architect, formerly of Dublin, and now of Buckingham-street, Strand, London. The old house was a plain cubical block, three storeys in height over the ground with a basement. The wings and portico shown in the view have been added, and a new roof wuth bold cornices, also new window-dressings, so as to give some degree of architectural character. The house is situated in the middle of a noble demesne with some splendid timber and charming scenes. The work has been carried out very satisfactorily by Mr. James Cavanagh, of Limerick, at a cost of about £4,000.@

At the time of the Irish Tourist Association survey of 1942, the site of Caherconlish House was described as a Creamery. The surveyor writes that a fine Adams ceiling in the house was destroyed by an accidental fire in 1925. Caherconlish no longer exists.