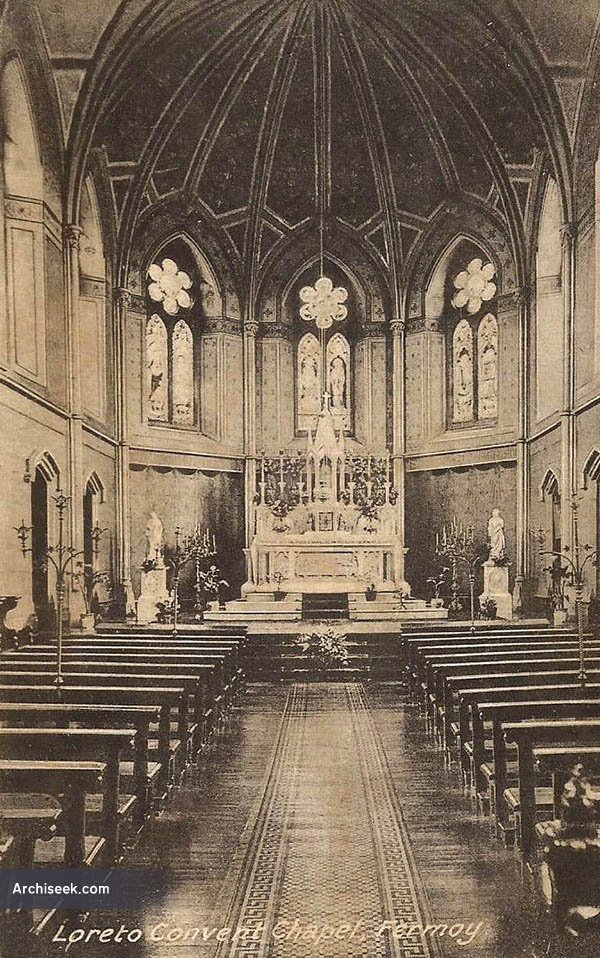 Extending an already established convent, Ashlin designed a new wing comprising recreation hall and dormitory, and chapel. Started in 1868, the dedication of the church was held on 16 April 1873. The interior is largely intact.

Illustration of extension by Ashlin published in The Irish Builder, September 15 1869. “The subject of our illustration is a new wing which is being built at the Loretto Convent, Fermoy. As will be seen, the ground falls to the front very rapidly, and advantage has been taken of this to introduce a two-story building in advance of the chapel. The division between the two sections of the building is marked by a tower, containing staircase to a large dormitory, which occupies the entire first floor of the building in front, and also communicates with the organ gallery of chapel. Under the dormitory is a fine recreation hall, 80 ft. by 28 ft. The chapel is 82 ft. long and 28 ft. wide, and terminates in a semi-octagonal apse. The ceiling is groined, the groining carried on marble shafts, with carved caps and moulded bases.

The building is being executed by Mr. Newstead, builder, Fermoy, at a cost of £3,500. The materials employed for the walliug are red sandstone, and white limestone dressings. The architect is Mr. G.C. Ashlin, of St. Stephen’s-green, Dublin.”