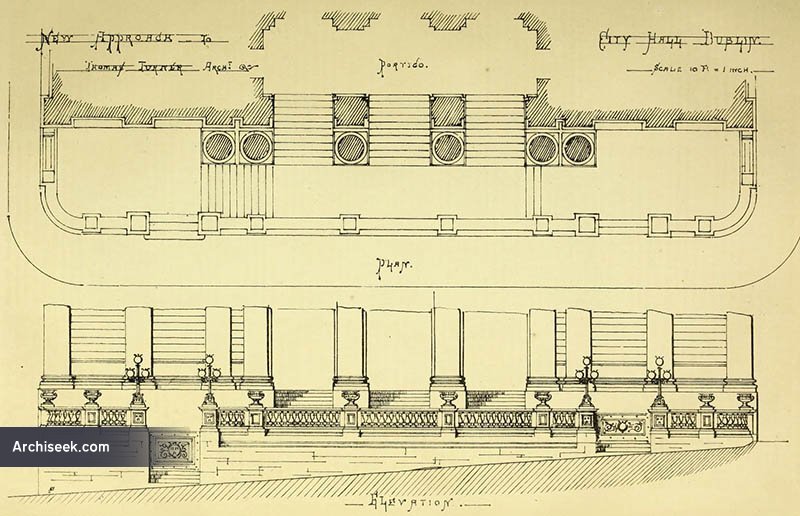 In 1814, while the building was still the Royal Exchange, the balustrade at the front collapsed killing a number of people in a crowd gathered outside to witness the punishment of a criminal. An iron railing was erected in its place, but it was not until 1866 that the Corporation accepted a design by the architect Thomas Turner for a replacement stone balustrade.

“These alterations, of which we give an illustration, are now about to be carried into execution, after having been under the consideration of the Corporation for a considerable time. Many of our readers will recollect that a premium was offered by the Corporation for the best design for improving the present inconvenient access to our City Hall, when, after due deliberation, it was awarded to Mr. Turner, who is now engaged in carrying out the work.

Owing to the rapid fall of the ground, and the limited space available in front of the building, it presented some awkward points to be dealt with but, as our illustration will show, these have in a great measure been satisfactorily overcome. The front presents the appearance of a terrace wall, behind which are the steps leading to a spacious landing (protected in front by an open balustrade of convenient height) from which again start the remainder of the steps to the portico.

The surface exposed by the removal of the present steps, as well as all the new work, is to be of Portland stone. On the pedestals, on which stand the lamps, are panels with the arms of the city, and it is intended that the gates shall be embellished in a similar manner.” The Irish Builder, May 15 1866.

In 1867, The Irish Builder remarked that “We would be simply doing injustice in the present instance if we are not to accord our praise to the Municipal Council of the Corporation of Dublin for the restoration, or rather modification, of Cooley’s original design for the balustrade which stood until the year 1814 in front of this building”.