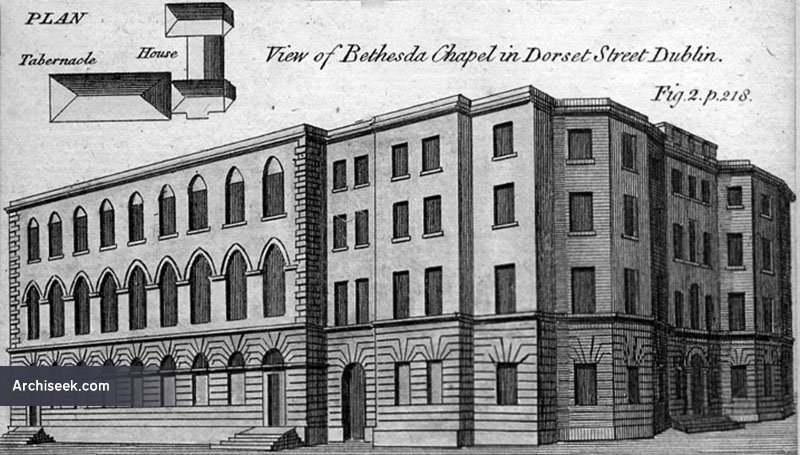 In 1784 William Smyth, a Dublin merchant, founded the Bethesda Chapel in Dorset Street in connection with a female orphanage and, later in 1794, with the Lock Penitentiary. The illustration is a woodcut from Gentleman’s Magazine in 1786.

The Bethesda Chapel became associated with a wide circle of Dublin philanthropists. Replaced by a new building fronting onto Granby Row in 1838 to designs by Frederick Darley.

“About sixty years since, a chapel was erected on the east side of Dorset street, at the private expense of William Smyth, Esq nephew to the Archbishop of that name. He denominated it Bethesda, from a well known scriptural allusion and appointed two clergyman of the establishment to officiate according to the forms of the national church. He afterwards annexed an asylum for female orphans, in which thirty six children are regularly supported, clothed, and educated and in 1794, the Rev John Walker carried the views of the founder still further into effect by opening a penitentiary for the reception and employment of such women dismissed from the Lock hospital, as wished to return again to the paths of industry and virtue. About 50 are generally in the asylum, where they are employed in washing, mangling, and plain work. Since the commencement of the institution between 700 and 1000 females have been in the house, numbers of whom have given the strongest proofs of a complete reformation, and many of them have returned to their families or been otherwise provided for. N0 place of worship in Dublin is better attended, than Bethesda chapel, to which the solemnity of the service, the sweet voices of the females, and the excellent purposes for which the establishment was founded all serve as powerful attractions.” The New Picture of Dublin: Or, Stranger’s Guide Through the Irish Metropolis, 1831.