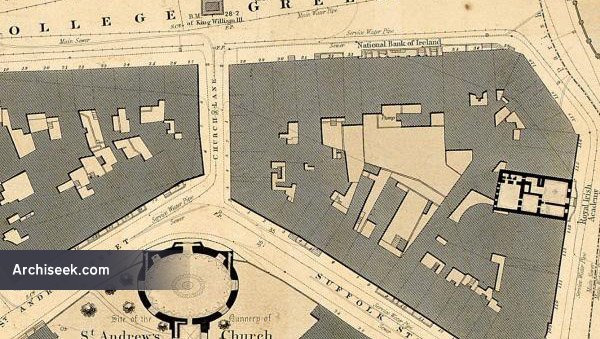 “The church, situated in St. Andrew’s-street, opposite Church-lane, was commenced in 1793, and completed in 1807, at an expense of £22,000. It is of elliptical form, 80 feet by 60, whence it has acquired the popular name of the Round Church: over the principal entrance, which is at the extremity of the lesser axis of the ellipsis, is a statue of St. Andrew bearing his cross; and at the opposite end is the communion table, reading desk, pulpit, and organ loft, with galleries for children on each side of it.”

“This church was originally situated near the Castle but it was rebuilt on the present site, in the form of an ellipsis, from which it was generally denominated the Round Church. Becoming again decayed, it was in the year 1793 found necessary to rebuild it with the exception of the lower part of the old walls. It now presents an elipsis of 80 feet by GO, and it is 43 feet to the cornice. The exterior is extremely uninteresting presenting to the eye a low vestibule of mountain granite with urns on the wings and on the centre a statue of St Andrew with his cross.

The interior is however a complete contrast to the outside being light, firmly proportioned, and highly decorated. The south side of the elipsis is occupied by the reading desk and pulpit over which rises the organ. The communion table in front, enclosed by a handsome semi ellptical railing, forms one side of the oval area that occupies the centre of the church which is beautifully floored with black and white stone. From this diverge like radii the passages to the seats which rise in the form of an amphitheatre. The gallery forms a graceful oval nearly round the church and is supported by fluted columns with highly ornamented capitals. From the centre of the ceiling, which is on a plan of uncommon beauty, is suspended by a gilt chain the magnificent branch that formerly graced the House of Commons it having been presented by Government to this parish.”

Replaced and earlier round 17th century building. The proposed tower was only partially built. The architect Francis Johnston was also responsible for the interior decoration. Burned in 1860 and demolished to make way for the Lanyon, Lynn and Lanyon church of 1862.