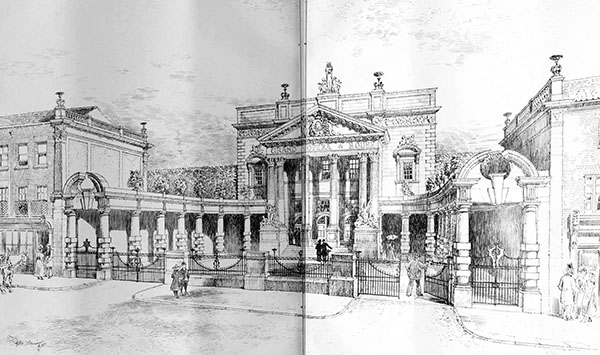 Although this design was not constructed, a similarly planned building designed by W.G.R. Sprague opened in 1903. By 1906, it had been renamed the Hippodrome and had became a variety house. It struggled financially from the end of the war throughout the 1950s and closed in 1960. Sprague’s building was demolished in 1964.

“This theatre, which is to be erected in St. Giles’s, Norwich, on the site of the old Norfolk Hotel, which has been pulled down for the purpose of such erection will occupy about two-thirds of the site, and will accommodate between 2,000 and 2,500 persons; the remainder of the site will be occupied by a first-class restaurant and outlet. The front main wall of the theatre will be set back from the main frontage of St. Giles’s about 25ft., and will have a semicircular carriage sweep in and out, as shown on perspective. The theatre will be constructed on fireproof principles throughout, and the main front will be of white stone with richly-carved figures. Ample means of ingress and egress have been provided, and every modern principle has been employed in the designing of the building. The stalls and pit will be below, and the crush-room and circle will be upon a level with the street. There will also be an amphitheatre and gallery, and efficient saloon accommodation will be provided to all parts of the house. The cloak-rooms, retiring rooms, and sanitary arrangements will be of the most modern and up-to-date kind. The building will be lighted throughout by electricity, and the decorations, furniture, and equipment will all be carried out from the designs, and under the superintendence of, the architects, Messrs. Ernest Runtz and Co., of Walbrook, K.C.” Published in The Building News, October 20 1899.