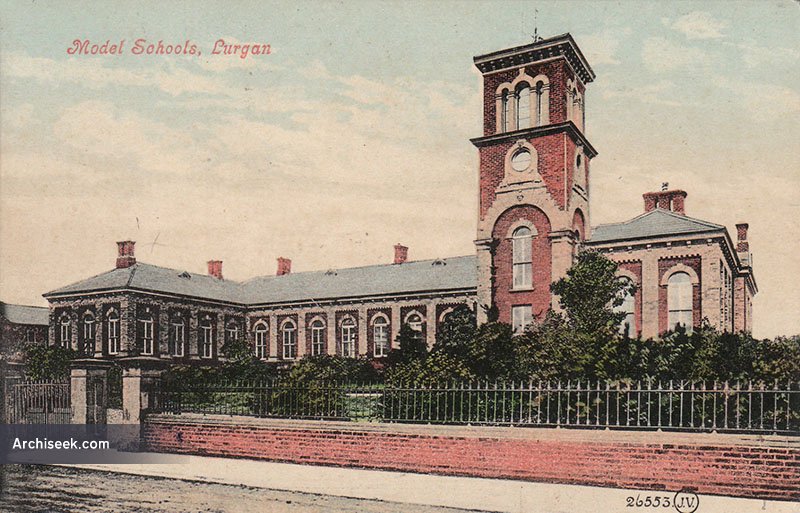 Constructed with Coalisland brick and stone in an Italianate style complete with clock tower. The Model School was part of the national schools programme proposed in 1831 in which each county in Ireland would have at least one school that would serve as an example to other national schools in the area. Initially it had a multi-denominational intake, offered such services as night classes and industry-relevant vocational courses, and was enthusiastically supported by local landowner William Brownlow who is thought to have brought the school to the town.

“The style of architecture adopted is the Italian; the basement is of uncoursed ashlar up to window-stool course; the shaft wall is built partly of red perforated brick in pannels, and the pilasters and corbel course (which latter crowns the window arches) with Coalisland fire brick of a light shade of colour, the whole being sur mounted with a handsome and massive cut stone cornice. The schools are composed of a centre building, and east and west wings which project about 38 feet in front of the former; attached to the west wing is a very handsome tower, about 14 feet square, and 53 feet high, divided into four stages, the third of which is prepared to receive a four-dial clock; the fourth being an observatory, in which we understand it is intended to erect, permanently, a large and powerful telescope. This tower is of the same description of materials as the rest of the building, but more richly ornamented with cut stone dressings; each key-stone of the clock-frames represents a head of Old Father Time as if looking down with paternal care on the young folk below. The three upper stories of the tower stand on four vermiculated stone arches, which have a massive appearance, each key-stone presenting a bust of Britannia with visor and helmet. 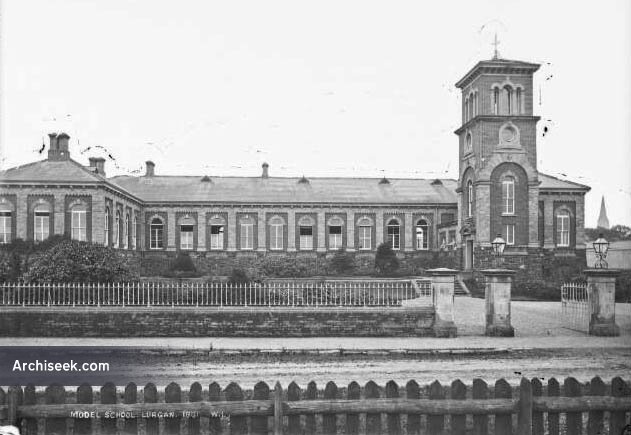 The interior of the building is arranged into three distinct school rooms; that for the boys being 54 feet long by 30 feet wide, and 21 feet 6 high to the wall plate; in connection with this room is the lecture-room, 24 feet 6 by 30 feet, in which is fitted up a spaciousgallery. The lecture room and boys’ school-room are so constructed that they can be thrown into one grand hall, when required for general examinations, by removing a panelled framing from an arched cap,which appears most mechanically constructed; off the lecture-room is the apparatus apartment, 20 feet by 12, to be fitted up with large glass cases. Next to the lecture-room is the girls’ school-room, 39 feet by 30 x 21 feet 6 high, it will also be furnished with glass cases, &c.; off this room is a class-room fitted up with a gallery capable of seating 60 girls; from this we pass to the infant school room, 29 feet by 24, and same height as the others; this room, as also the others, are so arranged as to be lighted from both sides, which impart to them a very pleasing and cheerful appearance; off this also is a class-room, with gallery, &c. Attached to each school room is a cap or cloak room, provided with racks, &c.; in these rooms there is also a water supply, with wash-hand stand and basin.

The mechanical construction of the framing of the roof is a remarkable feature in the interior of the building; it has the appearance of great stability, although light and ornamental. The ventilation is (stated by our contemporary) perfect. The mode adopted gives free egress to the foetid atmosphere, while it prevents the cold air from blowing down on the heads of the children; the fresh air is admitted through brass sliding ventilators on the floor level, and through the top part of the windows when the weather permits. It may withtruth be said that our public schools are palaces as compared with those in which our fathers were educated, when the lap was the desk, and his form the soft side of a whin stone, or perhaps an old rafter from the roof of some dismantled cabin which had fallen before the fury of the previous winter’s gales. To the rere of the schools are extensive play grounds, in which are drinking fountains and airing sheds, in which the children can take exercise in wet or stormy weather. Off the sheds in each yard the latrines are built with separate stalls, which will be flushed daily with 300 gallons of water. There are also attached to the school most comfortable quarters which are intended for the carctaker, comprising two bedrooms in the attic story of the west wing, with a sitting-room, pantry, and kitchen in the basement, the latter being fitted up with kitchen range and all the accommodations of a first-class building.

On the whole we feel bound in fairness to say, that the schools under notice, so far as the building is concerned, are truly Model Schools, and reflect much credit on the architect, J. H. Owen, Esq., architect to the Board of Public Works; and on the contractor, Mr. P. Kerr, for the very excellent manner in which he has erected and completed the building, on which he principally employed local tradesmen. The painting was executed by Mr. James Robinson, Lurgan, and elicited a very warm expression of approval from the architect.

The entire buildings have been completed in the short space of fifteen months under the superintendence of Mr. P. Lynch, clerk of the works.” The Irish Builder, December 15 1862.