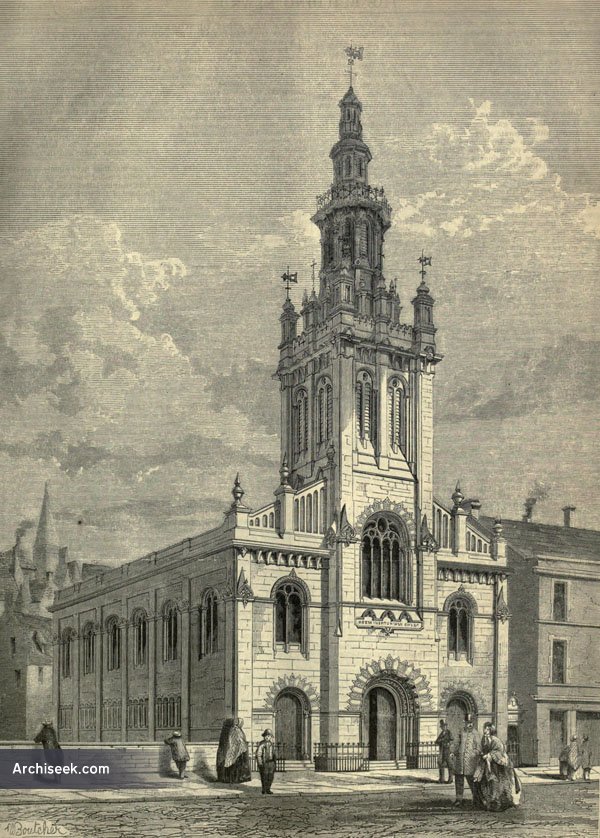 “Our readers will recollect an engraving which lately appeared in our paper, of Dr. Alexander’s Church, built on George IV. Bridge, Edinburgh, the building was opened on the 8th inst. under the most favorable auspices. The erection of the church was commenced about four years ago, when the old Argyle-square chapel was purchased for £2,000 by Government for the site of the new Industrial Museum. The architects of the new building were the well- known firm of J.W. and J. Hay, Liverpool, and by a striking coincidence we have to chronicle the death of Mr. John Hay in the same week as the opening of this, one of the finest of the many fine ecclesiastical designs which he has produced. The church is a large one, capable of accommodating 1,000 worshippers, an is computed to cost about £15,000, including the price of the site. The foundation is laid deep below the level of George IV. Bridge, and while the spire rises to a height of 120 feet from the pavement of George IV. Bridge, it is 150 feet above the lower level. The two stories below the the level of the bridge contain a classroom for the students of Dr. Alexander as Professor of Theology ; a large apartment seated for 200, intended for the weekly lecture-room ; church officer’s house, accommodation for the Sunday schools, retiring rooms for the members of the congregation, &c. The entrance to the church is from George IV. Bridge, through three recessed arched doorways. Above the centre doorway is a circular-headed window, 10 feet high, which lights what is called the organ gallery. The tower rises over this to the height of 120 feet from the pavement, and has a pagoda-like appearance, which makes it quite unique in Edinburgh. Perhaps the most striking feature of the interior is the open timber roof, the oak-stained spars being laid over a ceiling of blue spangled with stars. The roof is partly supported by thee walls, and partly by eight tail iron columns, which pass from the flooring through the gallery. The pews are low-backed, with a comfortable slope, and tolerably wide. The pulpit is low, being only three feet and a half in height, has no canopy, and is constructed of oak, finely carved and finished.