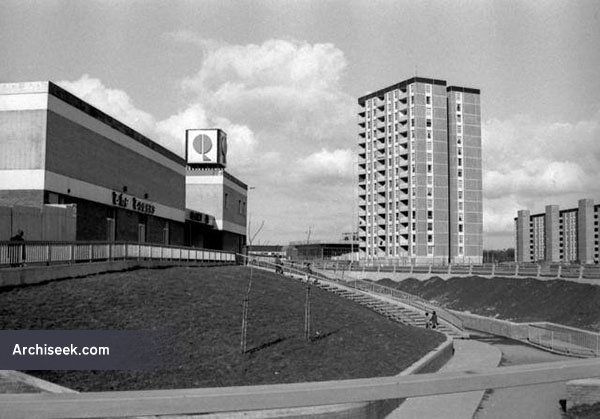 Designed as a quick fix for social housing needs, and constructed by 1966, the fiftieth anniversary of the Easter Rising, the towers were named after the seven leaders. The towers were named after: Patrick Pearse; Thomas MacDonagh; Eamonn Ceannt; James Connolly; Sean MacDermott; Thomas Clarke, and Joseph Plunkett. Each was fifteen storeys tall and there were ninety flats to each tower and six to each floor.

Constructed using the Balency et Schuhl system which was a French system of production. Notable for its use of precast walls and in-situ concrete floors which avoided the need for complex joints. The system included a functional block which contains the plumbing, water supply, gas pipework vertical heating mains and the mechanical ventilation duct. The second block was the floor slab containing the heating coils and the electric wiring. It was a very modular system.

The dwellings were larger than the average Dublin Corporation house and central heating was provided by a district heating system. This caused its own set of problems as the heating could not be turned down. The area suffered from lack of communal public facilities that were promised. Originally it was intended to have shopping facilities, office accommodation, an entertainment centre comprising dance hall, cinema, skating rink, restaurants, bars, community centre, meetinghall and swimming pool. Ten years after construction, only a swimming pool and a couple of public houses had been provided.

The area also suffered from an increase in unemployment and related social problems. Ballymun very quickly became a byword for poor planning and building, and asymbol of poverty, drugs, alienation from the state and social problems in Ireland from the 1970s, Demolition started in 2004.