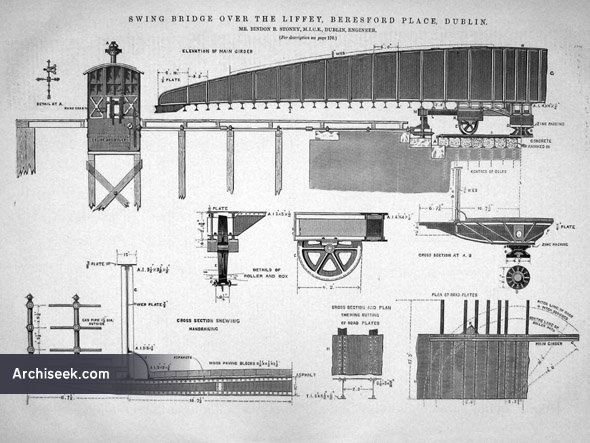 Design published in 1879 for bridge over the Liffey at Beresford Place. Eventually called Butt Bridge, despite The Irish Builder journal suggesting Gandon Bridge. It linked the new Tara Street with Beresford Place. It was replaced in 1932 with a more conventional structure.

“All the ironwork was supplied by the Skerne Ironworks Company, Limited, Darlington, and was put up under the superintendence of their engineer, Mr. Nabholz. The swinging portion of the bridge has been laid with native timber setts—viz., 18,000 beech blocks 8i” by 4i” by 3.J”—supplied to the contractor by Messrs. James Fitzsimon and Son, of this city; and the asphalte has been laid by the Limmer Company. The new bridge was designed by Mr. Bindon B. Stoney, Engineer to the Port and Docks Board ; and the general contract, foundations, stonework, &c., was carried out by Mr. W. J. Doherty, and completed within four mouths of the time specified in the contract.”