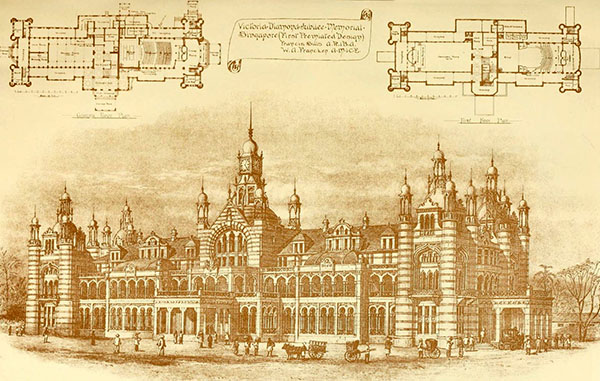 Selected design in architectural competition to design a permanent memorial to Queen Victoria’s reign. “WE publish this week a perspective view and two plans of the design for the theatre and assembly rooms at Singapore awarded the first premium in an open competition inaugurated by the Diamond Jubilee Permanent Memorial Committee, Singapore. The principal front of the building faces west, the central portion being occupied by the main hall and grand staircase, while the north wing contains the assembly rooms, and the south wing, which is entirely cut o& by the party-wall, contains the theatre. The assembly rooms and theatre are shown combined in one block, in compliance with the conditions laid down for the competition, and, as will be seen from our illustrations, the building is symmetrical, consisting of a central square tower and four smaller square towers, two at each end, connected with the central tower by rectangular main blocks with sloping roofs. There are two floors in the main blocks, and three in the towers. The main entrance to the assembly rooms is below the central tower. I )n entering, we pass through an entrance-hall, 42ft. by 20ft., into a main ha)l, 42ft. by 41ft., in which is placed the grand staircase, 12ft. wide. Adjoining the latter is a passenger lift connected with each landing. From the main hall we enter a supper-room, 80ft. by 50ft., with service-room screened off by movable partitions ; a smoking-room, a card- room, retiring-rooms for ladies and gentlemen, two kitchen lifts, and two offices for the staff are also provided. On the first floor is the ballroom, 113ft. by 50ft., with organ space, a card room, and retiring-rooms for visitors and performers of both sexes. On the second floor in the central tower is a domed octagonal smoking and card room .’i2ft. diameter. Behind the tower, on the roof, is a kitchen, scullery, servants’ rooms, and bath-room, connected with the ground floor by two lifts and a service staircase. This theatre has been designed in consultation with Mr. Horace T. Bonner, A.R I.B.A., known in connection with the Croydon Theatre. The entrance is at the south end, and the exits and staircases are so arranged that, in case of panic, the audience can leave the building in a few minutes. The auditorium contains on the ground floor seats for 125 in the stalls, 275 in the pit, and eight in the boxes ; a crush-room, 50ft. by 24ft., at the south end, and refreshment and retiring rooms for ladies and gentlemen are also provided. The first floor of the auditorium contains seats for I’M in the dress- circle and 14 in the boxes. There are also separate refreshment- bars and retiring-rooms for ladies and gentlemen. On the second floor in the towers at the south end are an electrical storage-battery room and a general storeroom. The stage of the theatre measures 50ft. by 35ft , and is entirely cut of from the rest of the building on the north by a party- wall extending above the roof, on the south by another wall and by a fireproof curtain, and on the east and west by fireproof doors. The lower ground floor, under the dressing-rooms and verandahs, contains a manager’s office, a room for band and supers, and a storeroom for scenery in use, easy access to which is obtained direct from the stage and from outside beneath the verandah. ‘ A room for painting scenery and for general storage is proposed to be placed in a separate building in the grounds. East of the stage on the ground-floor are the actresses’ dressing-rooms, with lavatory and verandah ; on the lirat-floor, the actors’ dressing-rooms, lavatory, and verandah; and on the second-floor, the supers’ dressing – rooms, lavatory, and verandah. The general dimensions of the building give a total length, exclusive of carriage porches, of 345ft., with a width of 133ft. The ground-floor, floor to ceiling, is ’20ft., the first- floor assembly-room is 35ft. high, and the theatre from floor to ceiling of dome is 50ft. The clock tower is 127ft. high. The soil is removed from the lavatories in buckets, according to the custom in Singapore, and the native attendants have access to the lavatories by means of spiral staircases in the turrets. The dynamos for electric lighting are placed in a separate building in the groimds, to avoid vibration in the main building. The lifts, which are intended to be electrically driven, are on Messrs. Waygood and Co.’s system. Singapore is infested with white ants, which destroy woodwork in a very short time. Special care has therefore been taken in the design to substitute steel and cast iron for wood wherever possible. The walls of the building will be of red brick and grey granite. The dressings, cornices, mouldings, and sculpture wiU be of terracotta and Indian patent stone. The arches and verandah columns will be of local grey granite. The interior columns, also girders, joists, and roof-frames, will be of steel. The grand staircase will have marble treads and balustrades, and will be supported on steel joists cased in marble. The floors of the main entrance – hall and supper-room will be laid with marble and mosaic : the floors of verandahs, cloak-rooms lavatories, &c., with Sills’ patent Indian tiles Raniganj tiles, and mosaic ; the floors of ball- room and stage and the doors will be of Moidmein teak. The sloping roofs will be covered with tiles and slates, and the domed roofs with copper.

The architect is Mr. Francis Sills, A.R.I.B.A., who is known in Calcutta and Bombay in connection with the erection of many of the largest buildings there, and the engineer is Mr. W. A. Francken, A.M.I.C E., who is also known in connection with large engineering works in the North-West Provinces, India.” Published in The Building News, January 6 1899.