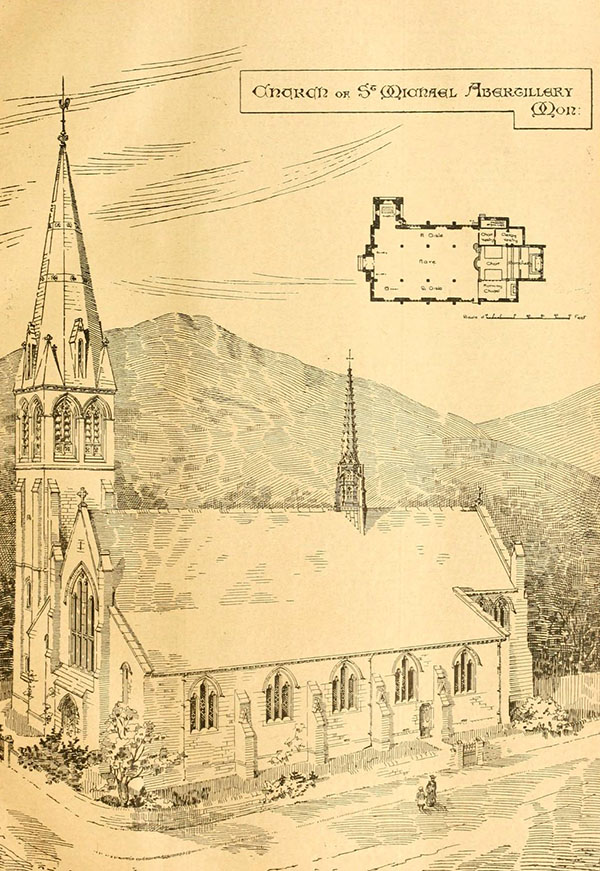 Largely constructed as designed minus the tower and spire, still in use today by its congregation. “This church has been erected on the site of a much smaller one, the latter having been pulled down on account of its unsafe condition, although erected not more than fifty years ago. The style is Late 13th-century, and the building will seat about 60O.The plan includes nave and aisles, tower, chancel, large vestries with organ- chamber over and heating apparatus under, as well as a morning chapel on south side. The walls are of local stone with Bath stone dressings, and the interior, including the arcade, is of buff Ebbw Vale bricks, with Bath stone capital and base, &c. There is no chancel arch. Between the nave and chancel there will be a massive rood beam with a cross in centre. Over this beam the roof is arched and panelled between two heavy principals which will carry the fleche, in which is hung a bell. lender this bell an open ventilating shaft is carried up from a trunk in roof, and inlet vents are constructed in the walls 6ft. above floor. The church is heated by fresh warm air by Messrs. Musgrave and Co., of Belfast. The glass comes from the studio of Messrs. A. Savell, of Albany-street, London, and the work is being carried out by Mr. A. P. Williams, Buiran, Abertillery, from plans and under the supervision of Mr. C. H. Fowler, F.R.I.B.A., of Cardiff. The district being a poor one, and funds being difficult to obtain, no ornament has been lavished on the building. Although a cheap, plain church, it is lofty and of good outline. From floor to apex of roof the height is 54ft. Gin.” Published in The Building News, January 6 1899.