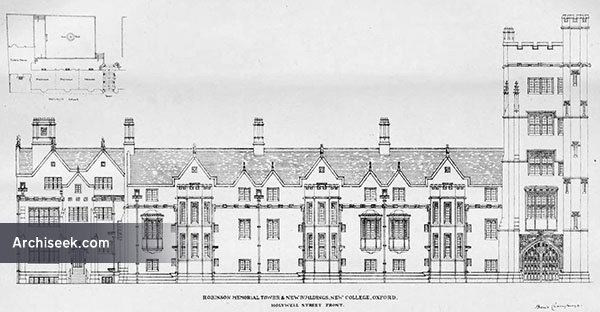 In the late 19th century New College, which was founded in 1379, began freely admitting undergraduates. The New Buildings by Basil Champneys along Holywell were built between 1873-96 to house them.

“The elevational drawing which we illustrate is now at the Royal Academy, showing the Memorial Tower to the late Alfred Robinson, M.A., Fellow and Bursar of New College, Oxford. Mr. Basil Champneys is the architect, and at the same time this work was carried out new staircases were added, thus completing that portion of the college buildings. Messrs. Benfield and Loxley were the builders, and Mr. W. Simpson acted as clerk of the works. Chipsam stone was employed.” Published in The Building News, June 16 1899.