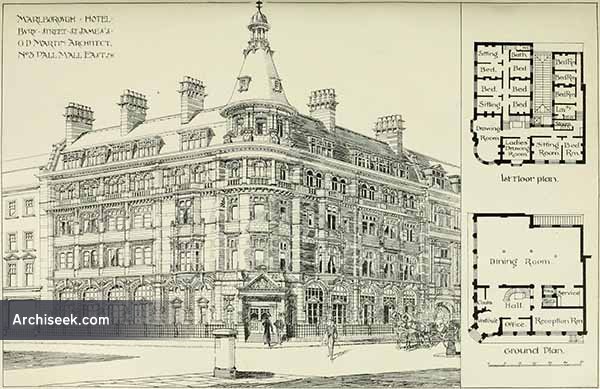 In 1896 James Ramsay, then the proprietor of Pearce’s Hotel at the corner of Bury Street and Ryder Street, agreed with the Office of Woods and Forests for a building lease of the site of his hotel (which he wished to enlarge) and of the adjoining premises in both streets. Ramsay’s architect was G. D. Martin of Pall Mall East, whose first three designs were rejected by the Office of Woods.

In May 1897 Ramsay agreed to sub-let the site to his builder, William G. Hornsey of West Ham, who took over direct responsibility for the building. A fourth plan was then submitted by Martin and approved in the following July. The original project had been for a private hotel, but this was now abandoned in favour of a much larger firstclass hotel and restaurant. Hornsey was to receive a sub-lease upon the completion of the work.

The building appears to have been begun in the latter part of 1897 and completed in carcase by October of the following year; it was opened in 1899 as the Marlborough Hotel. The new hotel had a short life. By 1902 William Hornsey was bankrupt, and in the following year the Commissioners of Works took over his building as offices for the Charity Commissioners. Now known as Ryder Court.

“This hotel, now in course of erection on the corner site formerly known as Ramsay’s Hotel, and to which has been added No. 12, Bury-street, and Nos. 12 and H, Ryder-street, is being carried out in accordance with the designs and under the superintendence of Mr. G. D. Martin, architect, 3, Pall Mall East, S.W., and will consist of seven floors. The basement has been planned for kitchens and the oflBces of the management, and there will also be a well-Ughted billiard-room and gentlemen’s lavatory. The ground floor will consist of a large dining-room, vestibule, entrance- hall, reception-room, bureau, and cloak-room, together with staircase and hydraulic elevator. The five upper floors will contain ladies’ and general drawing-rooms, and about 60 bed and sitting rooms. There will be ample bath and lavatory accommodation on each floor. The elevation, which is of Renaissance style treated in a free manner, will be executed in red brick with Monk’s Park stone dressings. The whole of the floors, partitions, and roof will be of fireproof construction.”