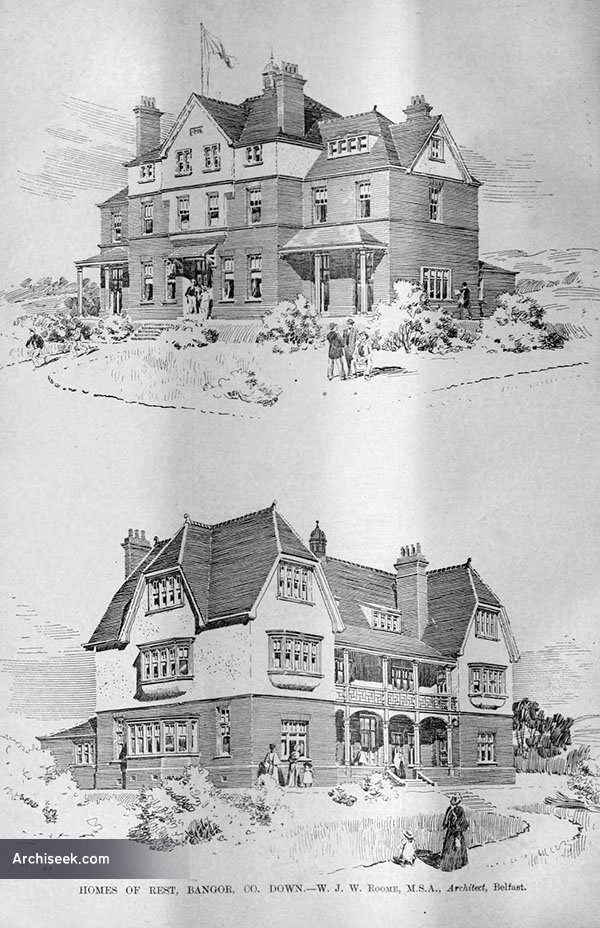 “THE building known as “The Rest for Girls” at Bangor has proved such a success that the committee decided upon erecting two similar homes, one for men and lads, and the other for mothers and children. Regarding the Home for Men and Lads, which has cost about £1,900, the exterior is Ted brick, and roughcast on the upper part of the building. There are large windows, and bays have been provided to obtain views around. Entering the vestibule, there is a large octagonal hall leading to the main departments, and with «n open grate at the opposite end of the vestibule, giving an opportunity for heating during the colder weather. On the right are cloakrooms, superintendent’s office, and a large dining room. From the dining-room there are French casements and a covered verandah. The servery leads from the dining-room to the kitchen and domestic offices. On the opposite wing of the central hall there is a corresponding apartment for the general sitting-room, with a bay commanding a very extensive view. The upper floors are fitted up with a number of bedrooms, some single and others double. Ample bathroom and lavatory accommodation has been provided on each floor. The design for the Home of Rest for Mothers and Children is based on a similar plan, but to a somewhat larger scale, the main sitting-room and diningroom being each about 35ft. long by 17ft. wide, and with large bays. In addition, a special feature of this building is an upper verandah, especially adapted for mothers with children in arms. The verandah opening from these bedrooms gives a large and quiet space for sitting and resting in the open air. These new homes have cost some £5,000 for building and furnishing. They were opened in July last. We may here add that the weekly terms charged for sojourning in the two new homes are as follows : — 2s. for a child under three years, 3s. under six years, 4s. under twelve years, while for a lad the amount is os. per week, for men 78., and for a mother with a baby the same amount. In the Girls’ Home the charge is Ss. per week. Mr. William J.W. Roome, M.S.A., is the architect. The builder is Mr. James Kidd.”