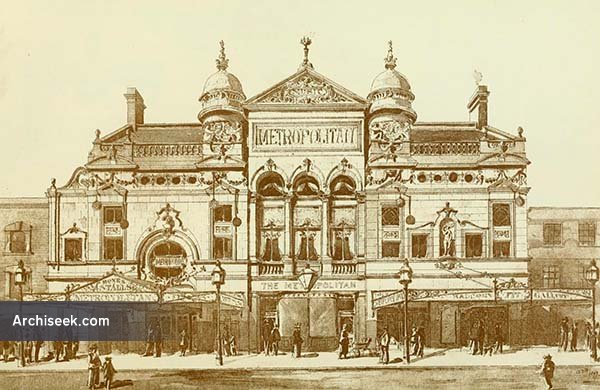 “This well-known variety theatre has just been rebuilt. It occupies the site of the previous “Metropolitan,” which was erected in 1862 on the same parcel of land occupied by the “Old White Lion,” a hostelry originally founded in 1524, when “Padynton” was but a small village on the Edgware-road. So late as the commencement of the present century Paddington numbered scarcely 2,000 inhabitants; to-day it is one of the largest Parliamentary-divisions, with two members of Parliament and 120,000 population. Mr. C. Gray Hill, of Coventry, was the builder of the present new house, and Mr. Frank Matcham is the architect. The construction throughout is fireproof.” Published in The Building News, February 25 1898. The theatre closed in April 1963 and was demolished in September later that year.