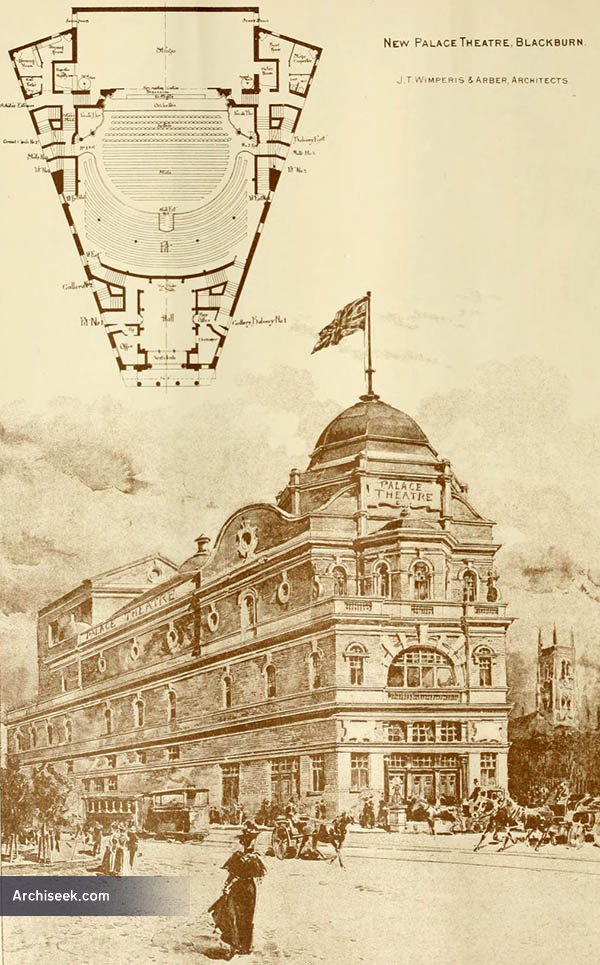 The Palace Theatre of Varieties was opened on 11th December 1899, and was designed by Wimperis & Arbour, assisted by W.G.R. Sprague. Operated as a variety theatre, it had a total seating capacity for 2,500, of which 1,000 of these were in the gallery. The theatre had 25 feet wide proscenium and a 30 feet deep stage. Opened as a cinema in 1936, and operated as such and a bingo hall until the 1980s when it was closed and demolished.

“This building is just started on a lino open site in the Station-square faring the railway terminus ; it has frontages on three sides, so that it is a model site for a theatre. It will be built with local bricks and Accrington facings, and will form a pictureque addition to the ornamental gardens and the new esplanade which has been formed by tunnelling over the river. The theatre is built of fireproof construction, and served with ample stairs and exits. There are two tiers with large stage-boxes, and a group of ten other boxes at the back of the grand circle leading off the foyer. The auditorium will seat over 2,000, and the plans have been passed by the licensing magistrates. Ample stage accommodation and dressing rooms are provided, with every modem contrivance, including a new patent “turn” clock of Mr. Arber’s own invention. Mr. S.F. Davidson, of Newcaatle-on-Tyne is the builder, the ironwork being by Messrs. T, Drew-Bear and Co.. The theatre is to be opened next summer. The architects arc Messrs. J.T. Wimperis & Arber, of Sackville-street, Piccadilly, London, W.” Published in The Building News, September 30, 1898.