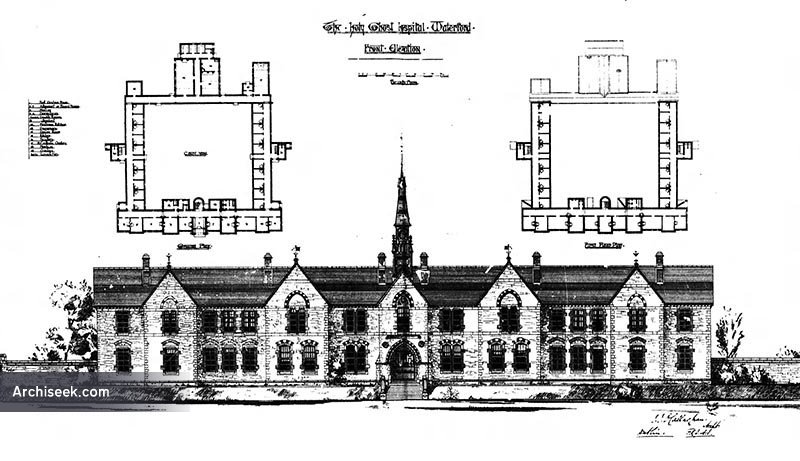 Founded in 1545, in the nineteenth century the hospital removed to the suburbs and in 1882 construction of the present hospital was started. A stone over the main entrance reads as follows: HOSPITAL OF THE HOLY GHOST FOUNDED 15TH AUGUST 1545 BY PATRICK & HENRY WALSH, MERCHANTS OF THIS CITY. FIRST MASTER WAS HENRY WALSH. THE HOSPITAL ORIGINALLY STOOD ON THE SITE OF THE OLD MONASTERY OF THE GREY FRIARS & THIS BUILDING WAS ERECTED IN 1882 MATTHEW SLANEY MASTER.

There are two identical plaques on either side of the main entrance showing the Holy Ghost, in the form of a dove, descending on the Apostles. This carving is surrounded by the inscription: SIGILLUM HOSPITALIS SANCTI SPIRITUI WATERFORD. No longer in use as a hospital but providing living accommodation.

“This building, now nearing completion and of which we give an illustration in our present number, occupies a commanding site immediately adjoining the City of Waterford. The grouping is simple but picturesque. The material for walling is local stone of good quality, while the dressings are of granite. The roofs are slated. The whole of the works are being carried out in a most substantial and creditable manner by the contractor, Mr. M. Hunt, Waterford, who is also contractor for the addition works of gate lodges, boundary walls, and entrance gates, also now nearing completion. The Clerk of works if Mr. H. Lennon. The plans were obtained in open competition, and have been prepared by, and the whole of the works carried out under the superintendence of Mr. J.J. O’Callaghan, architect, M.R.I.A.I., Harcourt-street, Dublin”. Published in The Irish Builder, January 1 1884.