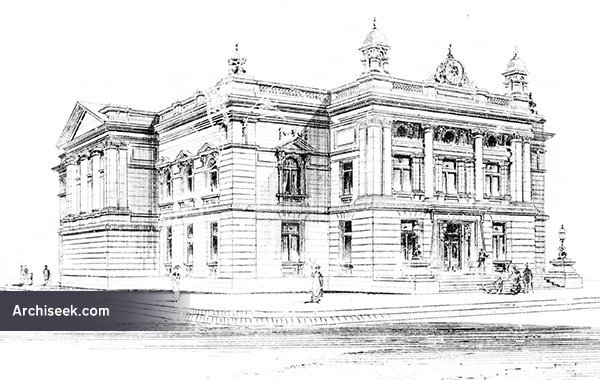 Design submitted for new court house after the previous building was damaged by fire. A joint submission by William Kaye-Parry with English architect Henry A. Cheers, but the of the County Surveyor, Christopher Mulvany was selected. Published in The Irish Builder, September 1 1883.

“The material proposed to be employed was local limestone. The authors of the design are Messrs. Henry A. Cheers and W. Kaye Parry, M.A., joint architects. The published drawing is from the pencil of Mr. Cheers, who, it may be remembered, was one of the five selected architects in the recent abortive Dublin Science and Art Museum Competition, and who is at present engaged upon some important works, amongst others being a church at Bagshot for H.R.H. the Duke of Connaught, which he won in open competition. We insert in another portion of our paper a letter from Mr. Parry on the subject of the Roscommon Courthouse, which casts some light upon the method of procedure adopted by the grand jury.”

There was a minor scandal in architectural circles regarding the competitions. From a Letter to The Irish Builder by William Kaye-Parry: “It then transpired that the competitors numbered six, namely, Messrs. Millar and Symes, Mr. William Hague, Mr. William Sterling, Messrs. Parry and Cheers, Mr. Kempster, of Ballinasloe, and the County Surveyor. Each was in tuen called in, and asked to explain his drawings, and then dismissed, the result of the meeting being withheld.

When the four Dublin firms who competed ascertained that the County Surveyor was a competitor, a hasty remonstrance was drawn up protesting against the action of the committee in allowing their salaried official to compete and requestion the appointment of a professional assessor. The receipt of this letter was acknowledged and a subsequent communication stated that it had been laid before the Committee, and that the plans of the County Surveyor had been selected.

I refrain from commenting upon the facts but publish them as a warning to architects of what they may expect when dealing with public boards. The amount spent by the competitors in travelling expenses exceed the premium.

It now appears that the advertisement was merely inserted for the purpose of complying with the provisions of an Act of Parliament.”