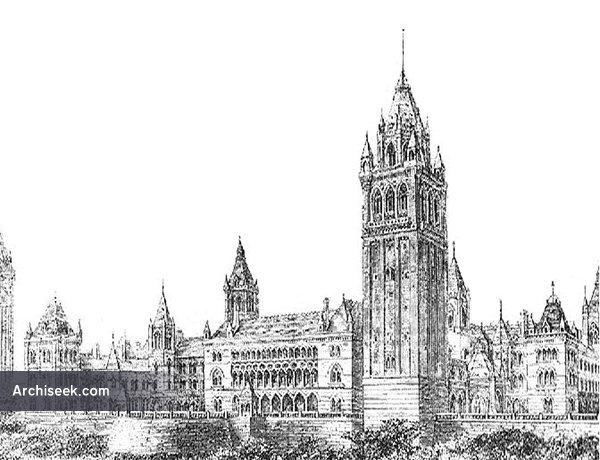 Plans for a new Australian Parliament House for Sydney were first announced in the early 1860s, and again in the late 1890s, although neither came to fruition. In 1861, the Irish architect William H. Lynn won an architectural competition to design a new Parliament House.

“Irish architectural talent has met with graceful recognition at the antipodes, for we find that in the competition for the best design forthe above-named important buildings, that submitted by Mr. W. H.Lynn (Messrs. Lanyon, Lynn, and Lanyon), of Dublin, Architect,was adjudged the first prize of £600. This is all the more complimentary as numerous Foreign, English, and Colonial architects competed. Mr. Lynn’s design is said to be—as may reasonably be expected—a truly beautiful composition in the Gothic style, with lofty towers, high pitched roofs, and picturesque outline. The probable expenditure is estimated by the architect to the local board of public works at £642,205. A Gothic design by Messrs. Stent and Haver, of London—who also contributed a classic one-obtained second prize.” The Irish Builder, February 1 1862.

From The Building News, January 24, 1862: “We learn that the designs for the new Houses of Parliament at Sydney, and of which twenty-one were sent in, have at last passed under the examination of the Board of Commissioners, and that tor two of them premiums have been awarded. On the 9th of November the Commissioners met, and were unanimous in their adjudication. The first premium of £600 was given for the design, “I bide,” and the second of £300, to “Hora e Sempre,” the first is by Mr. William Henry Lynn, of Sackville-street, Dublin. It is in the Gothic style, its most prominent feature being a succession of lofty towers, including a campanile ; the high pitched roof and windows being highly ornamented. The chief merit of the design is said to consist in the relief afforded by the broken outline, rich effects being produced by frequent and ornamented projections. The cost of carrying this design into effect is estimated by the colonial architect at £642,205.

The architects who obtained the second premium, are Messrs. Stent and Laver, of Great Portland-street, Portland-place. They sent two designs, the one Classic and the other Gothic. The Classic design presents a row of Corinthian columns, with massive entablature and pediment, and crowned by an octagonal tower. In the Gothic design there is a central tower. In considering their award in this case, the Commissioners regarded both designs favorably, but actually gave it for the last named. The estimated cost of carrying out the Classic design is £650,641, that for the Gothic £505,113.

Messrs. Stent and Layers are the architects for the Parliament buildings now being erected at Ottawa, Canada West, the foundation stone of which was laid, it will be remembered, by the Prince of Wales, in August of last year. Five only of the competitive designs were the production of colonial architects. “