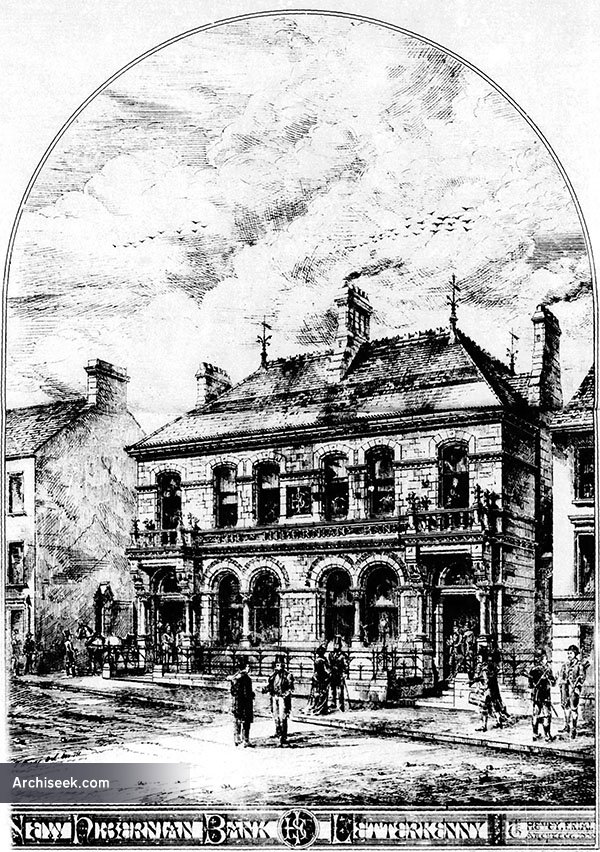 The Hibernian Bank aggressively pursued the business of the new Catholic middle classes, and in doing so, used an architectural idiom similar to that being used in the new churches being built at the time. The building is finished with limestone and two colours of sandstone, polished stone shafts to the columns, and round-headed windows to the banking hall. While not overtly Gothic in style, the use of such materials would have appealed to the new customer base. Hibernian Bank was eventually taken over by the Bank of Ireland, and is still in use today.

“The illustration with our present number is a photo-lithographic reproduction from the architect’s own drawing of the new building in course of erection in Letterkenny for the Hibernian Joint Stock Banking Company, to whose head offices, College-green, in this city, very extensive additions are at present being made. The company has secured a very excellent site in Letterkenny, facing the public square of the town, and sufficiently spacious to admit of the erection of suitable offices at the rere, and to allow portion of the ground to be set aside for garden purposes, &c. One-half of the ground floor of the build ing is occupied by the cash office, manager’s private office, strong room, lavatories, &c.; and the other half (to the left side) contains the parlour, kitchen, and kitchen offices, &c.

From the manager’s room there is a private door to the dwelling-house portion of the building, so arranged that no one can enter or leave without coming under the observation of the manager. On the first floor there are a large drawing room, four bed-rooms, dressing-room, bath room, &c., and servant’s bed-room. The rooms will be thoroughly ventilated, and the ceilings lofty, being, on the ground floor 14 ft. 6 in. and on the first floor 12 ft. 6 in.

The building is faced with the local stone (which is of a light blue colour) in squared uncoursed ashlar work; and the dressings to doors and windows, cornice, strings, &c., are of a light red stone from Ardrossan, with an admixture of Dungannon stone of a pale yellow colour. The columns to doors and ground-floor windows are of polished Bessbrook granite. The varied colours of the several materials, used with judgment and taste, are certain to produce an effect at once agreeable and artistic, and to make this building an undoubted ornament to the improving town of Letterkenny. The front windows will be glazed with polished plate glass in heavy moulded sashes. The internal fittings of the cash office will be chiefly of pitch pine (as will also be the general joinery), mahogany and other woods being occasionally introduced.

The architect of the building (whose design was selected in a limited competition) is Mr. T. Hevey, F.R.I.A.I., of Belfast, under whose directions the works are being carried out. Messrs. Collen, Brothers, of Portadown and Dublin, are the contractors, and we under stand they are fulfilling their contract in a way to give satisfaction to the architect.

The building will be completed in two or three months; and the cost, exclusive of carving, decoration, office houses, enclosing walls, &c., will be about £2,000.” The Irish Builder, February 1 1875.