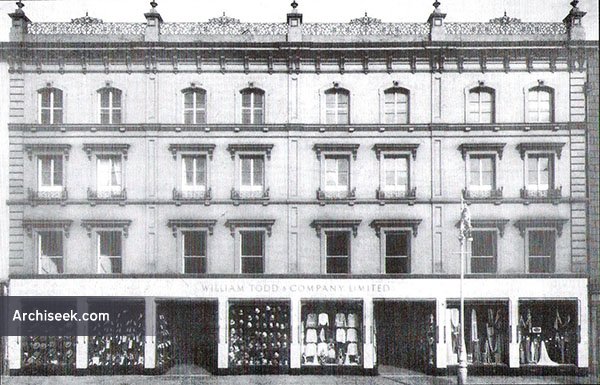 Todd’s was a Limerick landmark with a stately interior, long and wide mahogany counters, and an all-round balcony with cast-iron ornamental railings. The store was founded by William Todd and Archibald Murray, they set up business in Dublin, Belfast and Cork. They opened their Limerick location in a store formerly known as the Limerick Warehouse Company, previously Slattery and O’Neill. During the morning of 25 August 1959, a fire was noticed and reported in the building. Within an hour the entire store was a blazing inferno. At one stage, it was feared that the fire might spread to the entire city block. A new building opened in 1962, with the Todds name discontinued in 2002.

“Extensive premises are in the course of erection in Limerick for the newly formed drapery company of Messrs. Slattery and O’Neill (Limited). The site is at the junction of George-street with Brunswick-street. To the former street there will be a frontage of 75ft and to the latter of 150ft. The building will be about 60ft. in height and will be in the Italian style. The designs are by Mr. William Sidney Cox, C.E. The contractors are Messrs. McCarthy and Guerin. Cost about 6,000.” Published in The Irish Builder, October 15 1873.