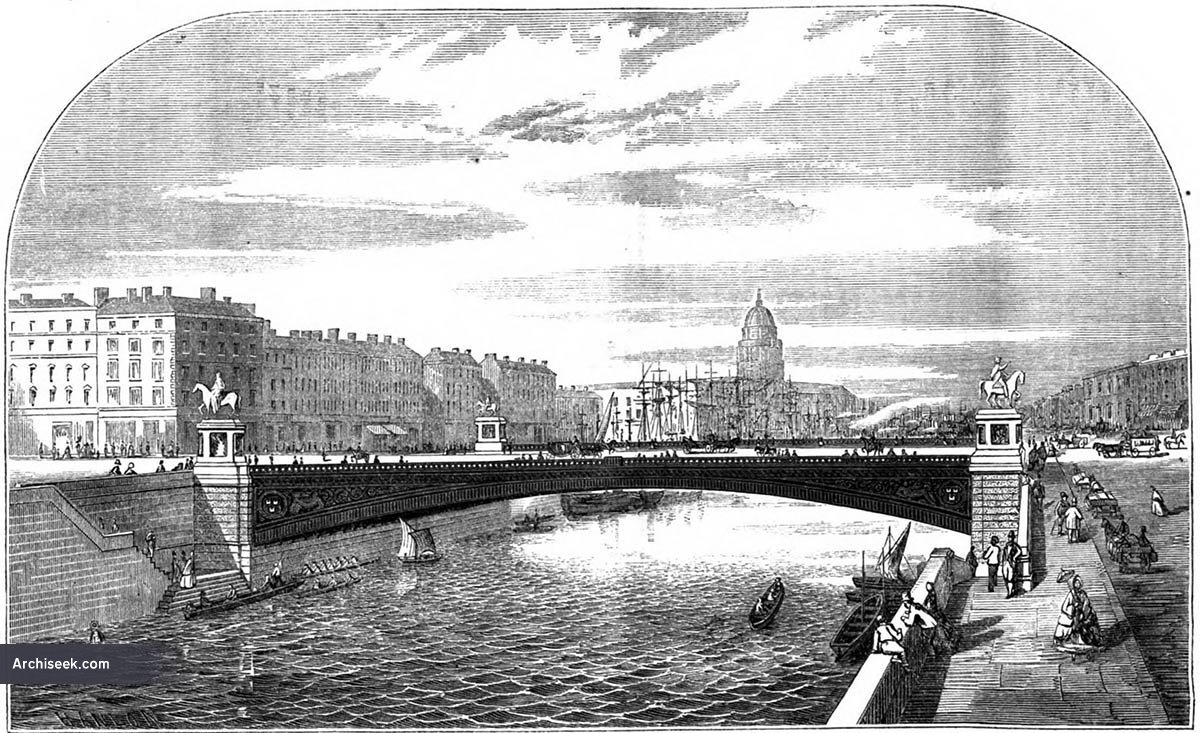 Design for bridge with steel span and decorative statuary. Entrant in architectural competition to construct a new O’Connell Bridge, replacing Gandon’s Carlisle Bridge, and awarded first prize. From a document submitted, with the drawings, by the designers – George Gordon Page, of London, and Richard Turner, of Hammersmith Iron Works, Dublin.

“We have endeavoured to follow out the wishes of the Committee, viz., that the bridge shall be level; the whole breadth of Sackville-street; abutments of stone; iron superstructure, and provision to do honour to illustrious men. The principles of the design are– that the structure should be of the most substantial and permanent kind; the water-way improved; and least possible obstruction offered to admission and discharge of fresh and tidal waters. The design consists of a single arch of 140 feet width, with a rise of 10×6; the trace rib and rib under the footpath springing at the level of high water. The ribs undercarriage way are one foot lower, to obtain greater depth and rigidity. The distance from face to face of embankment is 157.6, consequently abutments would stand out 8.9 beyond line of embankment wall. The construction of the arches would be in cast iron from the abutments to within 25 feet of the crown of the arch, the centre piece forming the key of the arch, 50 feet, being of wrought iron, so that the thinnest part of the bridge, which is in immediate contiguity with the roadway, and consequently subject to more shock from the traffic, would be of the safest material.” This principle has been carried out with great success at Westminster new bridge. All the central portion of the arch where the wrought iron ribs are inserted would be of wrought iron. Between the main ribs cross girders and beams, 36 apart, would be fixed, and on them are intended to be laid wrought iron buckle plates, with water-tight elastic bed to receive macadamizing and ballast of roadway. Footpaths are proposed to be of granite, of large sizes and hard quality, or of thick Valentia slabs

“The detail drawings are submitted to inspire confidence that the Bridge built on this construction cannot fail to be remarkable for its stability and excellence; and be in every way most suitable for, and adapted to its position and traffic. As to the embellishments, we have introduced the City of Dublin arms and motto in the spandrils, with the Irish harp and the shamrocks to fill up the spaces, all carried out in open work. The pattern in the balustrade, and the arrangement of pedestals on abutments can be altered if desired.

The authors, however, suggest as suitable, equestrian figures of the Queen and late Prince Consort next Sackville-street, and Wellington and Gough on corresponding pedestals at other end; with Lord Carlisle’s arms in the centre, as it so happens not only to bear his name as a justly popular Viceroy, but of a noble ancestor, also Viceroy, after whom the bridge was called. The cast metal kerbing, with roughed gutter and drains, will be useful as well as sightly, and we have kept the lamps on the edges of the footpaths, as best for lighting.”