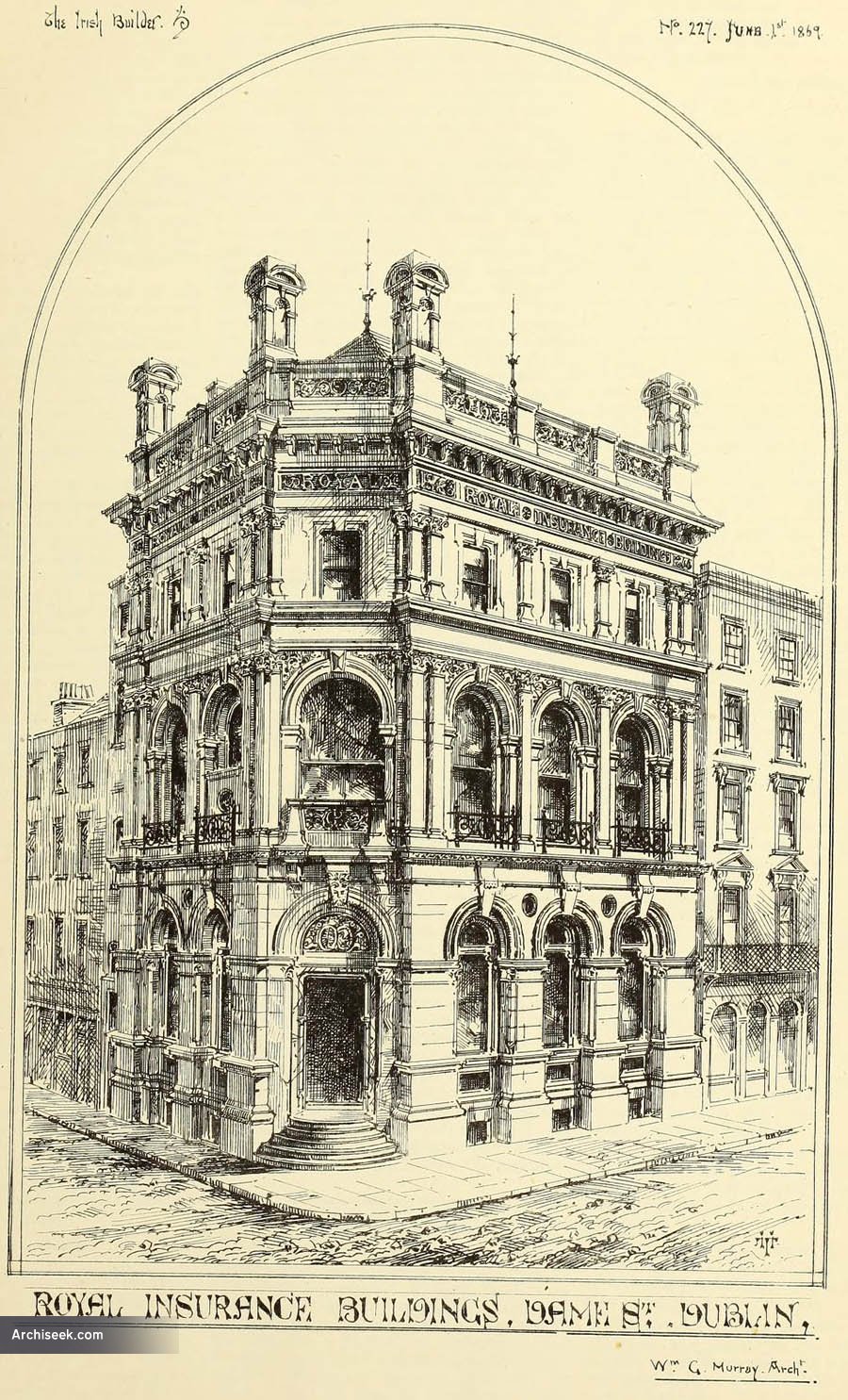 Italianate palazzo by William G. Murray on the corner of Dame and Fownes Streets. Finished in Portland stone, the building was elaborately carved. Demolished when the area was cleared for the construction of Stephenson’s Central Bank.

Described in The Irish Builder, June 1 1869: ” A VIEW of the new premises just completed for the Royal Insurance Company forms the subject of our illustration with the present number. Many of our readers have, no doubt, seen and admired the building on their passage through Dame-street, to which it adds a very striking and prominent feature on its northern side.

The building, which is of Portland stone, stands at the junction of Fownes-street with Dame-street, presenting to the latter a frontage of 462 feet, divided into three bays, and to the former of 42 feet, in two bays. These bays are divided from each other by a splayed angle, in which is placed the principal entrance. The jambs and head of doorway are formed of Irish marbles, red, green, and black, richly moulded, carved, and polished.

In the tympanum are shields bearing the arms of the company—the ” Liver ” being the most prominently shewn in the carving thereon.

Ascending by a flight of five steps the principal office is reached through a porch composed of Riga oak French polished, having beautifully carved pilasters on the interior, supporting an entablature bearing an ornamental canopy with arms of the company carved thereon, standing on a moulded pedestal, cap, and base mouldings continued round inside of porch. The two upper panels of door are glazed with polished British plate glass, and the two lower raised solid panels having bold mouldings. The counter and other office fittings, including two double desks, are of Spanish mahogany French polished. The counter front is divided into bays of 4 feet 6 inches each. The bays are formed of richly-carved pUasters on face, with brackets over same supporting counter. 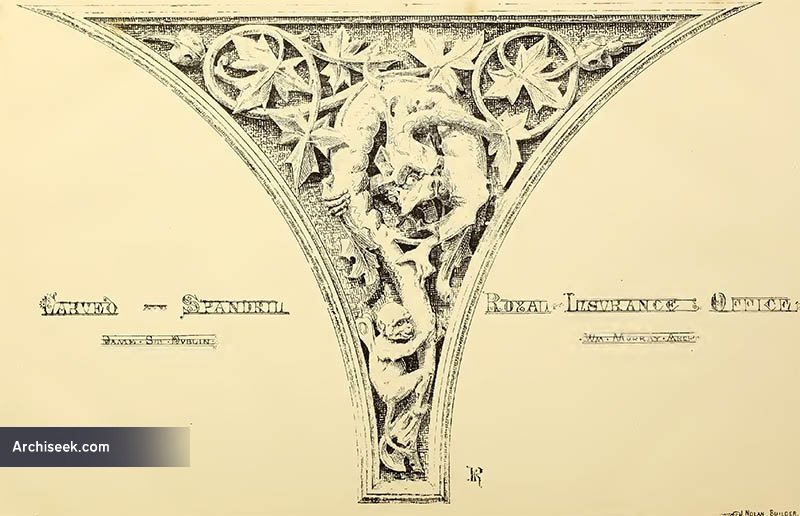 The full bays are subdivided into two panels, with semicircular heads moulded and divided by small pilasters, having moulded caps and bases. The top of counter is of one piece of mahogany 2 feet 8 inches wide and 18 feet long. The principal office is 28 feet square, and 2Q feet in height. At one side of this office are manager’s office and strong room, and staircase leading to the board-room over same.

The plaster work in centre piece, and spandrils in principal office, as well as the carved work on the exterior of building, are well worthy of critical examination. They are treated in a masterly style ; we shall always feel pleasure in recording the carrying out of works which, like this, will bear a strict and rigid examination of even the most minute details. The upper floors of the building (to which we may observe, there is a separate entrance in Fownes-street) is devoted for the purpose of letting as offices. The architect was Mr. Wm. G. Murray, Lower Gardiner street. The contractor was Mr. John Nolan, Meredyth-place.

We understand that the “Royal” has made more progress both in their Life and Fire business than any company yet established. We, of course, do not intend to present any figures to our readers ; the numerous agents of the company will supply all information to those wishing to insure.”