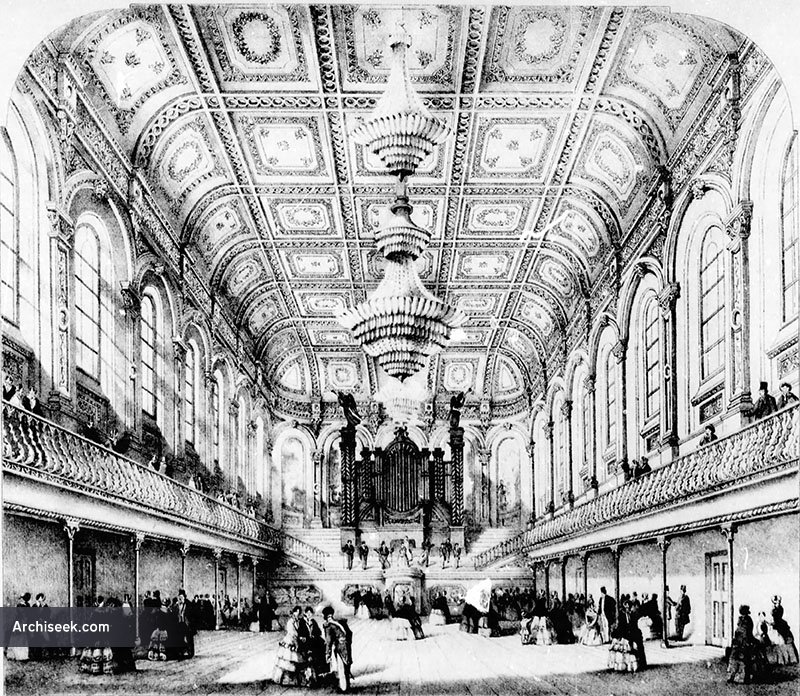 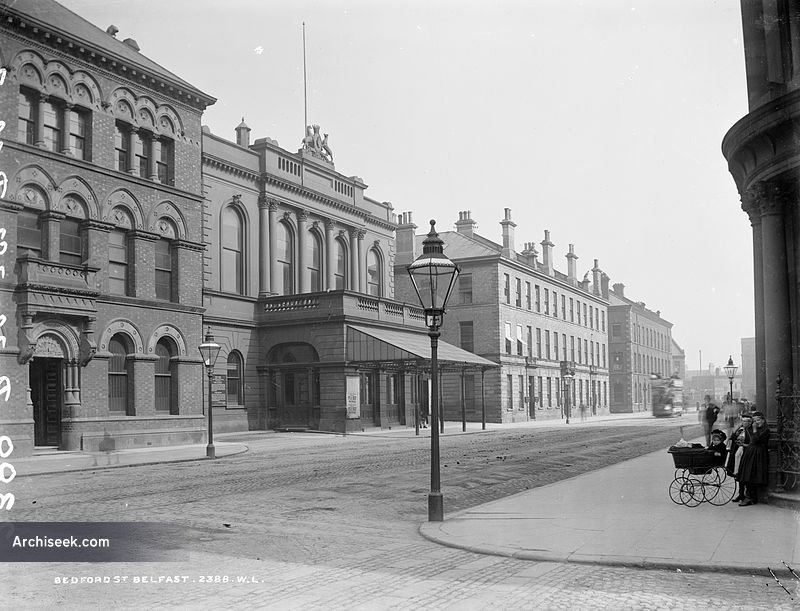 Opened in 1862, by the Ulster Hall Company, the hall’s purpose was to provide the expanding city of Belfast with a multi-purpose venue of sufficient size. On its opening night on 12 May 1862, the hall was described by the Belfast Newsletter as “stand[ing] unexcelled, and all but unrivalled, as an edifice for the production of musical works. … the hall is a great and unmingled success, and the public, no less than the proprietors, may feel the utmost gratification at a result at once so pleasant and so rare.” 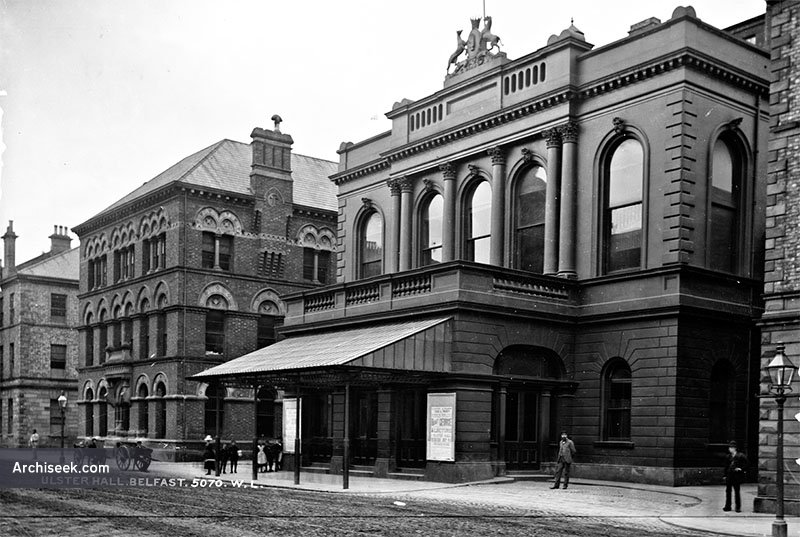 In 1902 the hall was purchased by Belfast City Council (then named the Belfast Corporation) for £13,500 and it has been used as a public hall ever since.

“THE buildings now in course of erection under the title of the Ulster Hall—the subject of our illustration—form a parallelogram, 235 feet by 90 feet, running from Bedford-street to Linen Hall street, the entire space occupied being nearly half an acre of ground. The general arrangements of the place has the great hall with corridors on either side, forming the central portion of the building. In front of this, and extending to Bedford-street, is the wing which contains the principal entrances, waiting rooms for audience, lobbies, &c., and over these on the second storey the minor hall; in the rere, extending to Linen Hall-street, is that containing the rooms provided for the accommdation of the performers, the board-room, rooms for porters, kitchen, and other offices. The principal entrance is from Bedford-street, through an arched piazza, 16 feet wide, under which carriages can set down. Opening on this is the vestibule, 30 feet by 28 feet, with a waiting-room 25 feet by 17 feet on either side, and retiring rooms also attached. The vestibule leads to a lobby 12 feet wide, extending along the end of the central hall, giving access to it and to the corridors, and containing the principal staircases to the galleries and minor hall. The minor hall, which is intended for the purposes of smaller concerts, lectures, and exhibitions of works of art, is 63 feet by 32 feet, and will give seat accommodation to 400 persons. It will be principally lighted from the roof.

The great hall—which is the principal feature in the building, will be much larger than any music hall in Ireland, and exceeded by very few in Great Britain—is a parallelogram of 138 feet long by 63 feet wide by 63 feet high, with the angles cut off by curves 10 feet radius; the ceiling will be flat, with circular coves and panelled. Around three sides of the interior will run a gallery 10 feet 6 inches wide, and which is intended for the first-class seats. Along either side of the hall a corridor 8 feet wide and two storeys in height is inten thus giving the greatest possible facilities for the ingress and egress of audiences, and for the classification of seats. The entire seat accommodation, including galleries, is for an audience of 2,000 persons.

The orchestra will accommodate 300 performers, beside space for organ, &c. The rooms in the rere wing, for the accommodation of the performers, will communicate with the orchestra by passages affording separate entrances for the solo and chorus performers. The entrance to this wing will be from Linen Hall-street. In addition to the principal entrance there will be two others in Bedford-street, communicating directly with the corridors, and also a carriage-way entrance in Franklin-street.

The building is being principally erected in brick; the principal front in Bedford-street will have the piazza of stone, the remaining portion of the front being finished in cement, with stone architraves and dressings to windows. The front in Linen Hall-street will be finished in red brick, with white brick dressings. The works are at present more than half advanced to completion. The contract has been taken by Messrs. D. and J. Fulton, and is being carried out under the immediate superintendence of the architect, Mr. W. J. Barre.” The Irish Builder, April 1 1861.