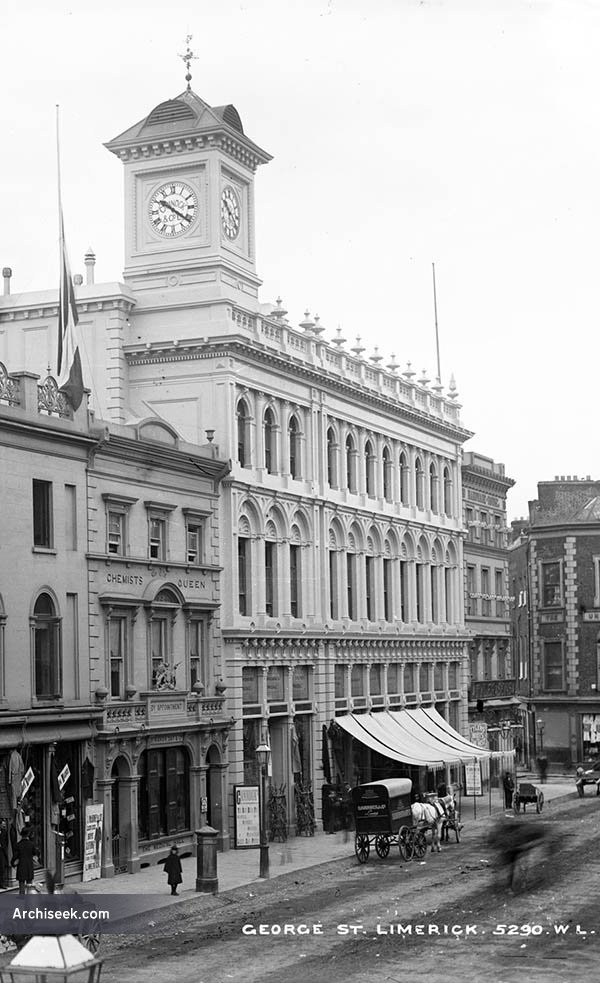 Part of the building was constructed in 1858 and described in The Irish Builder, February 1 1859: “Messrs. Cannock, Tait and Co’s premises occupy a plot of ground 210 feet long by 125 feet extreme width, the frontage towards George’s-street being 66 feet. They have been almost completely rebuilt during the past year, on the entrance into the firm of Mr. Peter Tait, the eminent contractor for army clothing, whose evidence before the Royal Commission on Army Contracts has been recently published, and has attracted much attention.

The greater portion of the space is but one storey in height, roofed with lantern lights towards the north, as in the large Dublin house of Cannock, White, and Co. of Henry-street. The front and some of the rere buildings are of two or three storeys, the upper storeys being appropriated to kitchen, dining, and sitting rooms, library, and sleeping rooms for the assistants. The ground floor is laid out in the departments customary in such establishments, there being tow shop-doors with large glazed porches, mahogany swing-doors etc. The entrance to the house and for assistants is on Honan’s-quay, some distance from the front.

The front is divided by pilaster and engaged columns into eight bays or upright divisions, and is of three storeys in height, there being a “mezzanine” or “entresol” immediately over the shop windows, and included under the shop cornices. Six of the ground-floor bays, between the pilasters are glazed with single planes of plate glass, each pane being nearly 13 feet by 7 feet – the remaining two forming the entrances. The whole are protected by Bennett’s patent interlocking revolving shutters. The horizontal transom over the shop and under the entresol windows is divided into a series of eight panels, illuminated and glazed over the colourings, the name and initials of the firm and various floral devices being introduced. The two extreme pieces are boldly rusticated and the shop entablature enriched with consoles, panels, lions’ heads etc.

The upper portion of the front is treated after the Venetian manner, with engaged Ionic and Corinthian columns and arcuated fenestration, the main cornice being of considerable projection, and an arched balustrade, with large vases and terminals at the top. The two flanks are treated in a corresponding style with the front as they rise considerably over the adjoining houses, and the chimney shafts are panelled and corniced so as to form effective features. The whole of the front is executed in Portland cement; and the windows throughout glazed with plate-glass.”

A 2-storey furniture & carpet deparment facing Brunswick St. was added by 1864, also by William Fogerty. The architect of Todd’s, William S. Cox was reponsible for some alterations in 1888, including the three bay extension with tower and clock. The clock tower quickly became a Limerick landmark. The clocktower and exterior was extensively remodeled in the early 1960s losing much of its architectural detail.