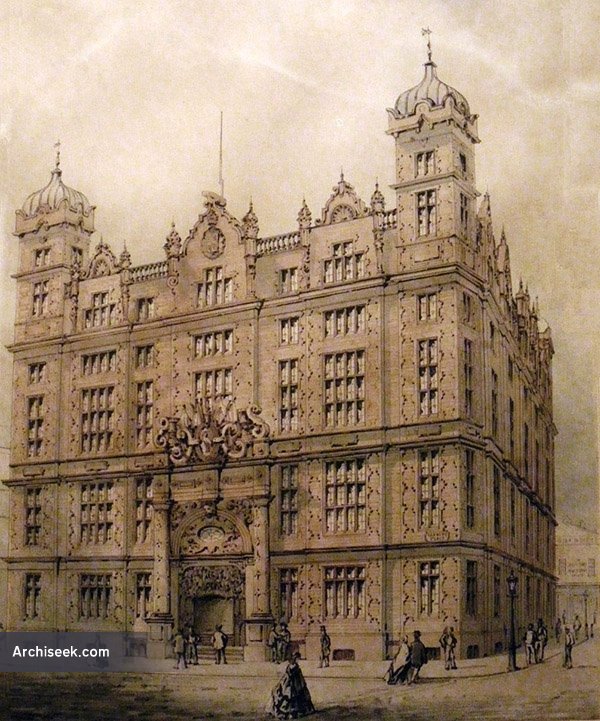 Liverpool Sailors’ Home, was designed to provide safe, inexpensive lodging for sailors, and to offer educational and recreational opportunities. It operated from 1850 to July 1969. The building was demolished in 1974, a few years after its closure in 1969.

Decorative features were preserved. Mermaid Railings from the home can be seen in Portmeirion in North Wales. The most famous decorative feature, the wrought iron gates jokingly known as the “Pooley Gates” after their maker, were sold to Avery in Birmingham and were on view at their museum. In 2011 the gates were returned to Liverpool and installed near their original location as a monument to the Sailors’ Home in Liverpool One.

During the construction of The Liverpool Sailors’ Home (1845–52), it is clear from contemporary reports that the architect John Cunningham, worked closely with Henry Pooley Jnr. on the designs of the iron-work: “three tiers of ornamental cast-iron pilasters with an intermediate range of galleries, filled in with ornamental cast-iron work depicting nautical themes characteristic of the purpose of the building, thereby forming six floors for dormitories, capable of accommodating on each floor forty-four cabins.” Pooley and Cunningham also worked together to re-build the Homes’ interior following the disastrous fire of April 1860 which closed the building for two years.