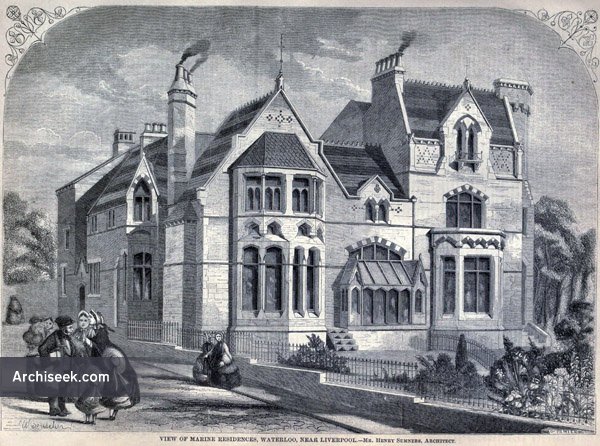 From The Building News, May 31 1861: “These newly erected residences are situate upon the shore at the above fashionable watering place, and are in the Gothic style of architecture. They are built in red brickwork banded with blue Staffordshire, with dressings in Stourton stone. The servants’ and domestic apartments are separated from the superior portions, great care having been taken to economise space. The larger residence (which is occupied by the proprietor) in addition to the usual entertaining rooms contains a music saloon, 30 feet by 18 feet, divided hy a glass screen from the conservatory, and having an open-timbered roof lighted from above. Through-out this house recesses were provided in which sideboards, cabinets, wardrobes, &c., in character with the style of structure and designed by the architect,have been placed as fixtures so as not to obtrude on the ground outline of the rooms. The warming (independently of the open fireplaces) is effected by means of a hot- water apparatus. The coil is placed in a chamber under the principal staircase adjoining the saloon, and to this the cold external air has direct admission, being then warmed to about 60 Fahr., and supplied to the saloon by flues placed in the wall about 6′ feet from the flooring, through the risers of stairs and to the vestibule. The saloon, ante-room, and conservatory, are further heated by a line- of pipes from the coil, and form portion of the skirting. The saloon thus forms a warm-air receptacle for the remainder of the house, upon the principal rooms of which it abuts; whilst to each bed-room the warm air passes from the stair- case by an opening above the skirting, through a flue in the wall, and enters about a foot below the ceiling. It may be stated that the principal stairs are dis- connected entirely from the hall and vestibule, and are only entered from the saloon and library on the ground floor.

The ventilation is simple, and has been found most effective. From the ceiling of principal rooms and of each bed-room, by openings concealed by papiermache flowers, the vitiated air is conducted through zinc tubes 4 inches diameter, above the ceiling joists to a central drum in the roof, from which a 9-inch tube communicates with a flue descending to the cellar, where, after having traversed a short distance under the ground floor joists, it takes a bend upwards, and ascends by a square shaft surrounding the kitchen smoke-flue of round earthenware piping, which by heating the air in the shaft causes a regular circulation to- be maintained.

Tlie total cost of erection was £3,000. They were built from the designs and under the supervision of Henry Sumners, Esq., architect. Royal Institution, Liverpool. “