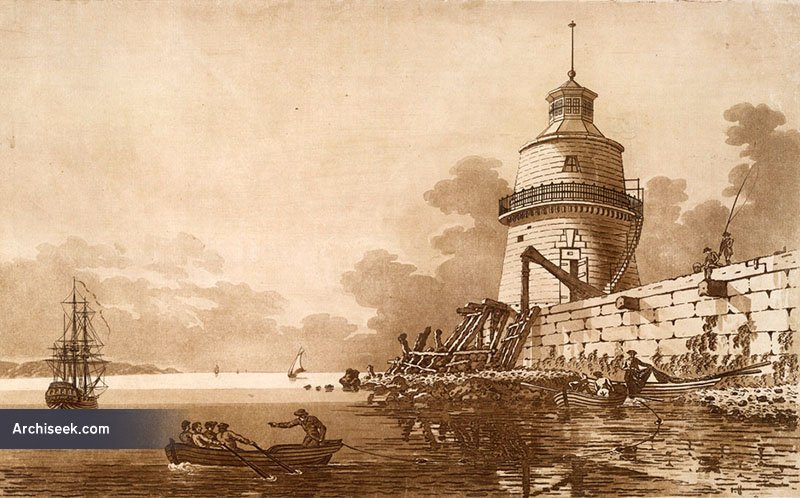 The Great South Wall on which Poolbeg Lighthouse stands, extends from Ringsend over 4km out to sea. It was the world’s longest sea-wall at the time of it’s construction and remains one of the longest to this day in Europe. The wall was finally completed with large granite blocks in 1795.

Described in “A view of antient and modern Dublin, with its latest improvements” published in 1807: “The Light house was begun June 21 1762 under considerable difficulties, from the depth of the water, from the power of the winds in such an exposed situation, and from the raging of the seas. These however were overcome by the masterly skill of Mr Smyth, the architect, who collected vast rocks and deposited them in a huge caissoon or chest which was sunk to the bed of the sea and afterwards guarded with a buttress of solid masonry, twenty five feet broad at the base. On this, the ingenious architect raised a beautiful circular structure, three stories high, surrounded by an octagonal lantern of eight windows. It is composed of white hewn granite firmly cemented gradually tapering to the summit and each story strengthened with stone archwork, A stone staircase with an iron ballustrade winds round the building to the second story, where an iron gallery surrounds the whole. The lantern is supplied with large oil lamps whose light is powerfully increased by reflecting lenses. The mode of lighting has been greatly improved and since the year 1768 ,when it was finished it has proved of most material service to the shipping resorting to Dublin.”

The lighthouse was ready in 1768 before construction of the wall finished and initially operated on candlepower, but changed to oil in 1786. It was re-designed and re-built in 1820. The current lighthouse is painted red to indicate ‘port side’ for ships entering Dublin Bay and North Bull lighthouse (on the other side of the bay) is painted green to indicate it is ‘starboard’.