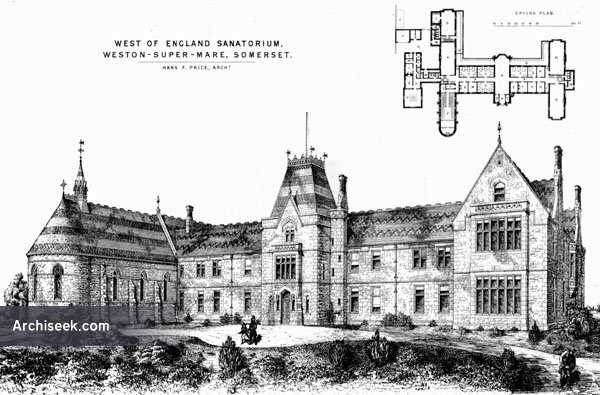 Much of the character of the buildings in the town of Weston-super-Mare derives from the use of local stone. Notable among the architects working in the 19th century was Hans Price (1835–1912). Many examples of his work are still to be seen: the Town Hall, the Mercury Office, the Constitutional Club (originally the Lodge of St Kew), villas and numerous other domestic dwellings

Published in The Building News, June 2nd 1871: “ONE of our lithographs this week represents the new building of this Institution as intended to be completed. The foundation-stone of the first portion was laid on Tuesday last, the 30th May, with Masonic honors, by the Right Hon. the Earl of Carnarvon, D.G.M., and Provincial Grand Master of Somersetshire, and in the presence of a numerous body of Freemasons of Somersetshire, Bristol, and other provinces. The Institution was started about three years ago, a house on the present site being purchased and adapted for the purpose. Since that time it has rapidly increased, and more accommodation being required, additional land adjoining has been purchased, and the new building commenced. The children’s and women’s wings and the dininghall are to be first erected, the old premises being connected with the new and used for the present for the men’s department. The grounds extend from the high-road to the sea-beach, provision being made for bathing on the sands.

The buildings have been arranged in accordance with the requirements of the medical staff, after a careful study of the arrangements of other kindred institutions. The dormitories provide a minimum of 8J0 cubic feet for each inmate,- and for adults and the elder children curtained tents are arranged between the beds for the sake of privacy, and there are a certain number of small rooms as private bedrooms for the use of those who pay an extra sum for the accommodation, but the whole of the inmates take their meals together in the central hall. In particular attention has been given to the subject of dayrooms, ample apace being provided in them for the whole of the inmates, the dormitories being used only for sleeping purposes. The whole of the building will be heated by hot-water pipes, and the day- rooms will have also open flreplaces ; each dormitory is fitted up with a range of lavatory basins, with hot and cold water laid on ; every provision is made for proper ventilation. There are no water-closets on the premises, “the earth system” being adopted throughout (it having been in use in the present building from the first, with the best results). The buildings are of native limestone, with hollow brick linings to the external walls, and dressings of Bath stone. The roofs are covered with tiles. The whole of the woodwork Internally will be of red deal and finished in distemper. The architect is Mr. Hans Fowler Price, of Weston-Super-Mare, and the contractors for the first three sections Messrs. John Harvey and Son, of Torquay.”