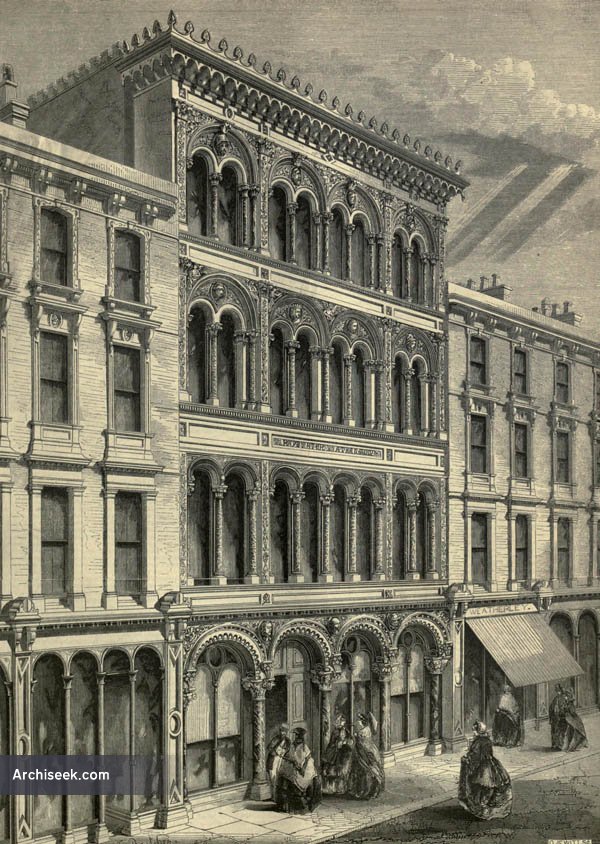 Originally built as an extension of the Bayswater Athenaeum, the facade is decorated with theatrical busts.

From The Building News: “In our journal for May 2lst, 1861, we gave a detailed account of the new hall which was being erected in Westhourne-grove, for the Bayswater Athenaeum. We now engrave, on another page, the elaborately carved front of the building, from which a general idea may be gained of the extent and nature of its decoration ; but full-sized drawings alone could give a fair idea of the delicacy with which every leaf and tendril has been executed.

Each floor is divided iuto separate compartments by sculptured pilasters. They contain a great variety of foliage, intermingled with fruit, flowers, and animals, conventionally arranged and very tastefully introduced. The grape, the melon, the peach, the apple, and the pear, are grouped with the convolvulos,
the fuchsia, the lily, the poppy, the geranium, the rose, the columbine, &.c. Birds and monkeys are here and there seen perched upon the foliated branches or peering out from the leaves of the pilaster-caps, of which there are upwards of fifty on the front, and on which we may trace representations of ivy, oak, black- berry, butter-cup, chestnut, fern, and fox-glove.

The circular panels in the spandrels over the ground floor are filled with busts of Shakespere, in the centre, and Bacon and Milton on either side.

Over the first floor cornice, tlie name of the building is carved in raised Medieval letters. The niches in the spandrels over second-floor cornice are filled with busts of the Queen and Prince Albert, with Walter Scott on one side and Handel on the other.

Figures of angels playing upon various musical instruments recline on the external lines of the archivolts. A small moulded and dentilled cornice divides this story from the one above it.

The third story is similarly arranged to the one below if, but there is a greater number of colored shafts, and the windows are somewhat smaller. Over these window-heads, occupying similar positions to those below, carved busts of Rubens, Raffaelle, Michel Angelo, and Dante arc introduced. Like the rest, they are rather larger than life-size. Upon the exterior of the arches on this story masses of carved foliage are introduced, conventionally arranged, but treated in a remarkably bold and free manner. They occupy the whole of the spandrel pieces between the springing of the arches and the underside of the entablature. The rest of the design can be seen by our engraving, and, together with the internal arrangements of the building, is fully described in our former account of it, at page 449.

The carving has been most ably carried out by Mr. Seale, architectural [sculptor, Walworth, under the direction of the architect, Mr. Arthur Billing, of the firm of Newman and Billing, Tooley-street.