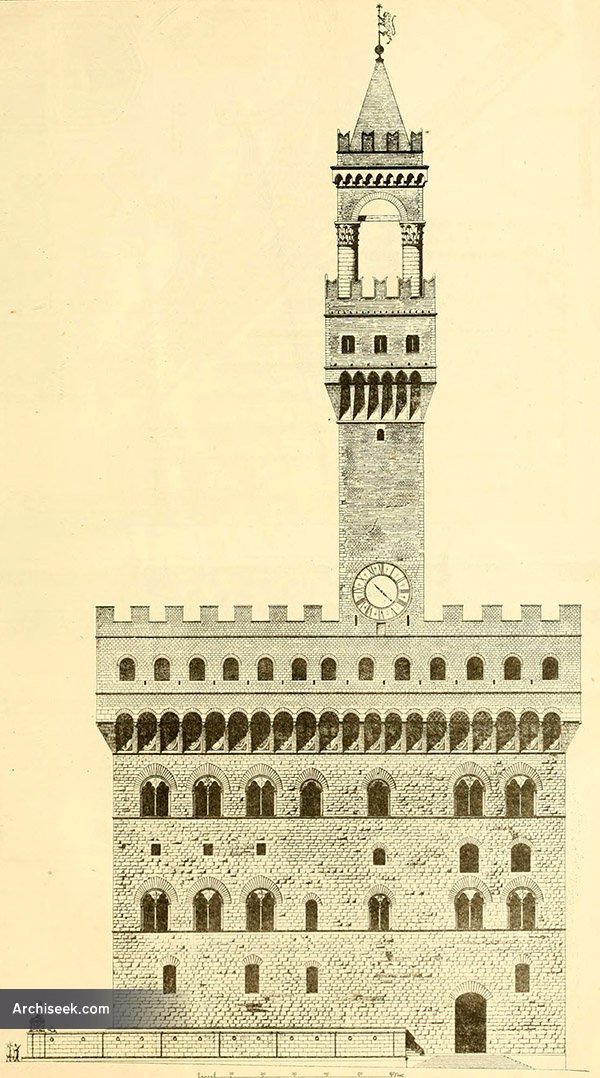 The Palazzo Vecchio is the town hall of Florence, Italy and now largely used as a museum. This massive, Romanesque, crenellated fortress-palace is among the most impressive town halls of Tuscany.

In 1299 the people of Florence decided to build a palace, worthy of the city’s importance and giving greater security, in times of turbulence. Arnolfo di Cambio, the architect of the Duomo and the Santa Croce church, began constructing it upon the ruins of Palazzo dei Fanti and Palazzo dell’Esecutore di Giustizia, once owned by the Uberti family. Giovanni Villani (1276–1348) wrote in his Nuova Cronica that Arnolfo di Cambio incorporated the ancient tower of the Foraboschi family as the substructure of the tower into its facade; this is why the rectangular tower is not directly centered in the building. The main facade and the 94-metre tower had already been completed by 1302, but the rear of the building was constructed and amplified in various periods through to the final modifications made by Ammannati in 1588.

Palazzo Vecchio’s current appearance is due largely to great works of renovation and interior decoration that were made around 1540, when Duke Cosimo I de’ Medici and his wife Eleanor of Toledo decided to turn the palace into their residence. Michelangelo’s David also stood at the entrance from its completion in 1504 to 1873, when it was moved to the Accademia Gallery. A replica erected in 1910 now stands in its place. The building has influenced manythe design of townhalls across Europe including the Rathaus, Fürth, Bavaria.

According to The Building News, December 27 1872: “The building has witnessed some of the most remarkable changes in the history of Florence. It was once the seat of a Republican Government, and afterwards became the palace of Cosmo I. Here are preserved the statues of David and others by Michael Angelo, and also the frescoes by Vasari illustrative of the history of the Medici family.”.