1875 – United Institute for the Industrious and Indigent, Leeds, Yorkshire 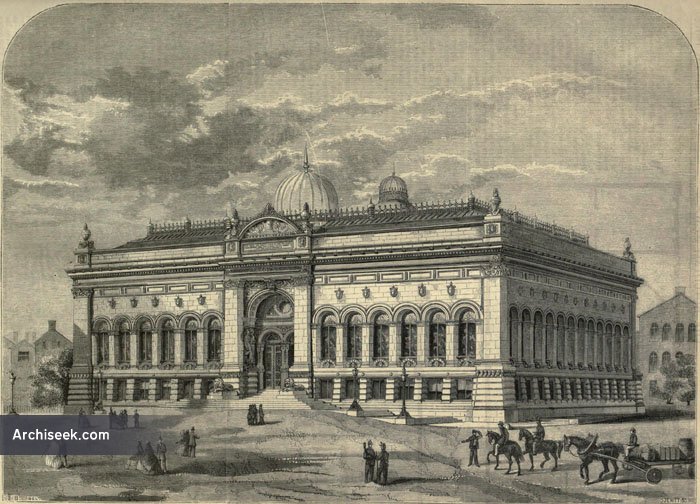 Constructed as a lecture hall, and location for study, the Institute was later used as a concert hall, and has now been converted for use as Leeds Museum.

The main interior space, the central hall is a circular room with balcony and Ionic columns, its floor raised on cast-iron columns. Called the Albert Hall, it was designed to accommodate up to 1,500 people, and lit by clerestory windows. Around it on a rectangular plan were a library, reading room, workshops and studios, classrooms (including one set aside for moral instruction), dining rooms etc.

From The Building News: “WE give this -week a view, and plans of the principal floors, of Mr. Cuthbert Brodrick’s artistic design for the intended New Mechanics’ Institute at Leeds. It will be remembered that the design was selected in competition. From a description supplied to us it appears that the site of the new building is an irregular block of ground covering about 4,000 square yards, adjoining Cookridge-street and Vernon-street, about 100 yards from the Town Hall, and is bounded by those streets on two sides, and by a proposed new street on the other. The form of the building is a rectangular square, and the angle at the junction of Cookridge-street and Vernon-street is, therefore, to be thrown open by this means; the approach to the principal front will be considerably improved. The style adopted in the design for the elevation is Italian, the material being dressed stone. It is two stories high. The principal entrance will be from Cookridge-street, but there will also be separate entrances from Vernon – street, and the new street previously mentioned. Externally, it appears, that the estimated cost has precluded great ornamentation in the details. The main entrance is bold and effective, its chief feature being an arch, supported by four caryatic female figures, surmounted by a pediment filled with sculpture. It is approached by a wide flight of steps, flanked on each side by sculptured lions couchant, which leads to a vestibule 50 feet by 40 feet, communicating with the several floors by steps to the right and left.

This vestibule is lighted by windows, two being on each side of the door- way. The basement and ground floor are also lighted from the sides by windows, the upper floor, which is appropriated to the School of Art, being lighted from the roof, as required by the Department of Science and Art. Internally the arrangements are spoken of as being of the most admirable character. The basement which is above the ground-level is appropriated to the boys’ school, a large tea-room and the porter’s house, eacli having separate entrances. On the ground floor there is a circular lecture-hall 80 feet in diameter, having a commodious gallery, the interior being lighted from the roof, which is domical, flattened in the centre and groined, corridors run along each side, both on the ground floor and behind the gallery, which can be used when necessary for the accommodation of the audience, as the walls of the lecture-hall are to be fitted with movable glass screens. In this way accommodation will be provided for about 2,000 persons, namely 1,100 in the hall, 600 in the gallery, and 400 in the corridors. There will be ample means of ingress and egress, and on each side of the platform there is a retiring-room communicating with the bottom corridor, on the south of the lecture-hall. Turning to the right on entering the vestibule, is the news-room which is j shaped and is about the size of the present one. Beyond, is the library, a large handsome room, with which it communicates by means of glass doors, and at the extreme end on the south is the board-room. On the north side, turning to the left of the vestibule, are a suite of rooms appropriated for the girls’ school. The upper floor, on each side of the lecture-hall, is devoted entirely to the School of Art, n picture gallery running across the front, and the whole communicating with each other in such a manner that they could be thrown open as a gallery of art, on suitable occasions. Above the vestibule is a dome- shaped observatory, which forms a prominent adjunct to the building. The estimated cost, exclusive of the land, is £13,030, towards which the Committee have already raised between £.5,000 and £6,000, exclusive of a grant which they anticipate receiving from the Department of Science and Art. In addition to this, they have in hand £400, the proceeds of the bazaar last year, and the present building which is valued at £4,000. They awarded £100 as the prize for the first design, provided they did not engage the architect to carry out the plans. We gladly hear that it is intended to commence the erection of the building early next spring. The architect as before mentioned, is Mr. Cuthbert Brodrick. ‘