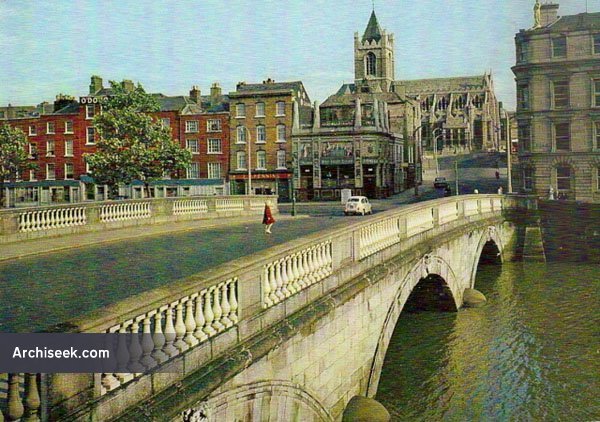 The Irish House was built in 1870 at the corner of Winetavern Street and Wood Quay in Dublin, and became a popular public house and well-known piece of Celtic Revival architecture. The Irish House featured an external stucco frieze, by local stuccodores Burnet and Comerford, of various figures from mythology and the history of Irish constitutional nationalism. The facade featured a figure of Eireann weeping forlorn upon her stringless harp, Daniel O’Connell stood clutching the Catholic Emancipation Act of 1829, Henry Grattan and a seventeen figure frieze depicting the Act of Union of 1800, all surmounted by a collection of monastic round towers.

The facade, popular with the public, was less so with the architectural press. The Irish Builder in June 1870 stuck the boot in: “the genius who designed the unsightly structure now in process of erection at the corner of Winetavern Street on the quays (which we understand is intended as a gin palace), having no scope in the sub-structure, directed his entire attention to the super. We were for a considerable time puzzled to discover what its skyline was intended to represent, but plasterers have been busily engaged up it for the past few weeks, and they have brought into view, by plentiful application of Portland cement, six ludicrous imitations of round towers perched upon its parapet.”

The pub was bought through compulsory purchase in 1968 and was demolished to make way for the new Dublin Corporation Civic Offices. Before demolition, the majority of the friezes were removed and put into storage at Guinness, where they remained for many years. Now in the possession of Dublin Civic Trust, they are periodically displayed.