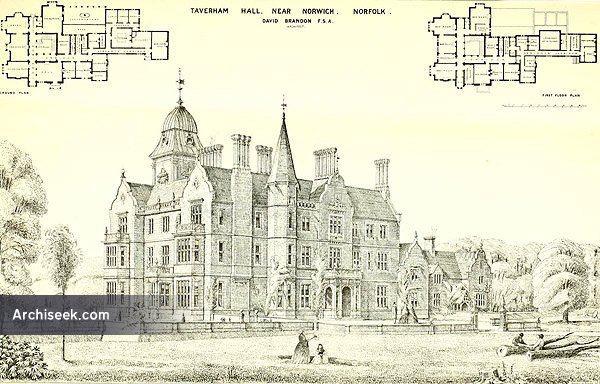 Taverham Hall is built on one of the oldest estates in Norfolk, and occupies the site of an old mansion of that name, which had fallen into such a dilapidated condition as to render restoration impossible. The architect from whose designs the present mansion was erected is Mr. David Brandon, F.S.A. The builder was Sir John Kelk. The materials are red brick for the walling, with Bath stone dressings. The roofs are covered with slates. The upper portion of the tower shown in the view is not finished. The owner of the estate for whom the house was built was Revd. John Nathaniel Micklethwaith. The Micklethwaits had no children and in 1901 the hall was passed through the female side to Revd. F.C. Mills, who lived in Warwickshire. He had no desire to live in Norfolk and leased the hall until 1921 when he decided to divide up the estate and sell it at auction. It was bought and converted into a school.