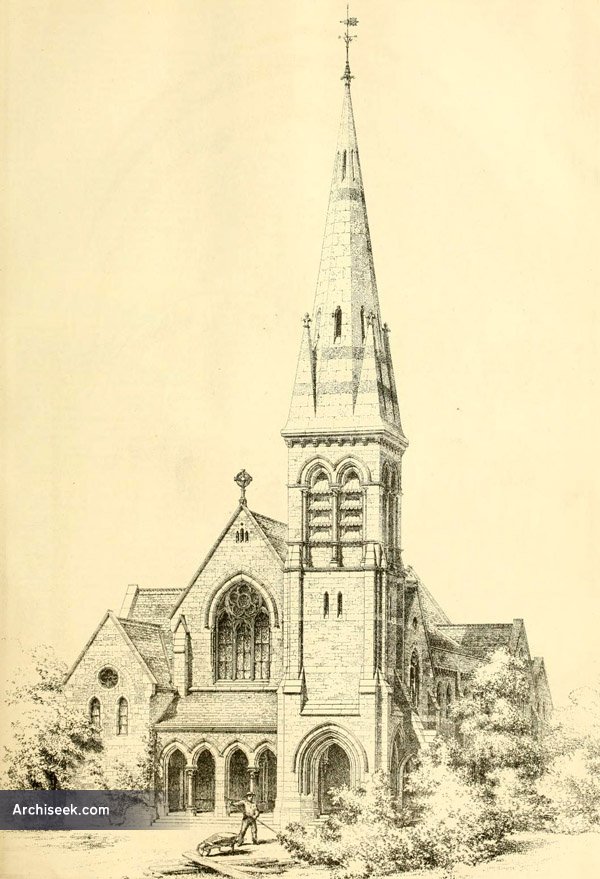 From The Buildings News, March 10 1871: “This church, a view of which is given in our illustrations this week, is in course of erection from the designs of Mr. E. C. Robins, of 16, Southampton-street, Strand. It occupies the site of the quasi-Classical building known as Union Chapel, which was erected in 182J. The church is designed in the Early French Mediaeval style, with lofty nave and aisles, but no clerestory. An open porch with coupled Devonshire marble columns and carved caps is situated between the west gallery staircase and the tower and spire. There are transepts at both the eastern and western ends of the aisles. The organ gallery is behind the pulpit and platform, and the deacons’ vestry is beneath it, on one side of which is the minister’s vestry, and on the other the eastern gallery stairs. Upwards of 800 persona are to be accommodated. The nave columns are 14in. diameter, and alternately of red Mansfield and Blue Pennant stone, with Portland carved caps and moulded bases. The cast-iron zones receive the ends of the gallery trusses which support the galleries on the north, west, and southern sides of the building.

The interior has an open roof, and walla faced with white gault bricks, relieved by red gault bricks in patterns and Bath stonework. An elaborate Caen stone screen and pulpit, supported on marble columns, forms the eastern termination of the raised platform and tessellated pave- ment. The windows are all tilled with tinted glass in patterns, and a painted wheel window will be fixed in tho east gable wall of organ gallery. The exterior of the building is faced with Kentish rag with Bath stone dressings. The bands in the spire are of red Mansfield and Blue Pennant stone.”