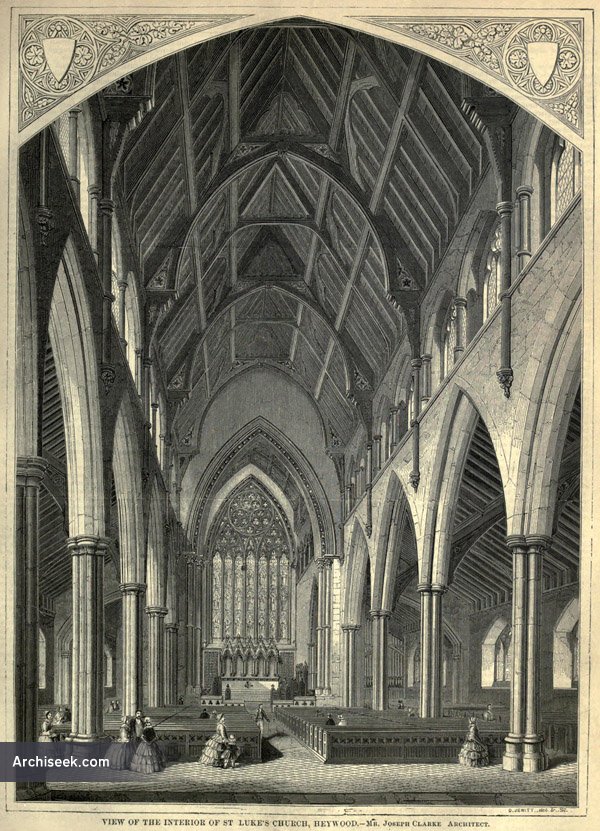 Published in The Building News, May 10, 1861: “The old chapel, after repeated additions, being galleried all round, became at last too small for the wants of the inhabitants, and after no small amount of labor the sum of over £10,000 was raised tore- build the church, The Committee applied for plans to Mr. Joseph Clarke, F.S.A of 13, Stratlard-place, London, and the present building; is being carried out, from his designs and under his directions, by Mr. Hughes, of Liverpool. Mr. Radeliffe being the clerk of works.

The church comprises a parallelogram of nearly 140 feet by 70 feet, divided into a chancel 42 feet long and 22 feet wide : a nave with aisles extending the whole length of the nave and chancel ; a vestry with the heating chamber under on the south side of the chancel ; on the north side, next to Yorkshire-street, and approached by a wide flight of steps, is a detached tower 14 feet square, exclusive of the buttresses and a spire of the total height of 190 feet, forming the principal entrance into the church; on the south side next Church-street is a porch with an entrance from this side : attached to the north chancel aisle is the chapel belonging to Baniford Hall.

The character of the church is Early Decorated, and is being built In the most solid and substantial manner with Yorkshire parpoint facing, Staffordshire ashlar-stone externally, and Bath-stone ashlar internally. The roofs will be open and of pitch pine, springing from a lofty clerestory on shafts with bands and pillars of colored stone. The east window is of seven lights of noble proportions. The west window is also very large and of six lights, and both in time will, it is hoped, be filled with stained glass. The clustered columns in chancel with the shafts of the chancel arch, and as well as the shafts and corbels supporting the roofs, will be of local colored stones mixed with marbles and serpentine as the funds allow with a certain amount of polychrome throughout. The seats are solid and of pitch pine varnished, with raised stalls of rich character in the chancel. The chancel will be paved with tiles and the other passages with stone. The carving will be rich, but a great deal will he left till after the church is other- wise completed, when it is hoped funds for this and other costly and appropriate fittings will be found to complete the church, in a manner worthy of the spirit which has prompted the good taste and munificence displayed in other buildings erected in the neighbouring districts.

The church accommodates over 1,000 sittings without any galleries. A heavy peal of 8 bells is now being cast by Messrs. Mears, and will be bung as soon as the church is ready. The churchyard will also be enclosed in a suitable manner.”