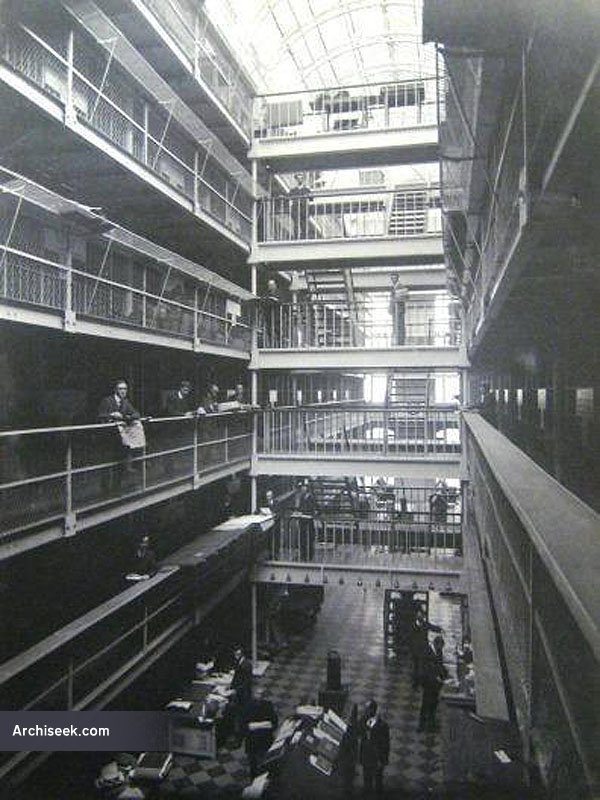 The repository of Irish records that dated from medieval times to 1922. It was used to store ammunition by the Anti-Treaty rebels occupying the Four Courts, which blew up when shelled by the Free State Army, while evicting the rebels. Nothing survived, except copies of census records, which had been copied earlier by the Mormon Tabernacle Church in Utah.

“A building by far the most important in point of size and cost, of a public nature, that has been erected in Dublin for some years, is the General Law Record Depository, which occupies a distinct portion of the site contiguous to the Landed Estates Court Offices. This building is now in course of completion, and it is estimated will have cost about £40,000 when completed. It is 220 ft. long by 100 ft. wide, in form rectangular, and is composed of two nearly detached blocks ; one containing the Registry Office, an office for public inquiry, for such as desire search to be made, and convenient offices for record keeper, registrar, and clerks, on each of three floors, with caretaker’s apartments on the basement, the other block, containing the Depository proper, consists of a basement, a ground-floor, and five galleries, divided into compartments, and filled with shelving for the storing of the deeds.

The public offices, which measure 40 ft. by 28 ft., is approached through a grand staircase, somewhat massive in construction, entered from a Roman Doric portico. The public office will be finished in a substantial manner, with an amount of tasteful decoration, and will be filled with counters suitable to its object. The ceiling is coved and panelled, and the space between the coves is formed into a lantern of five bays, separated by elliptical arched ribs, sprung from ornamental corbels. These ribs carry the skylight, from which the public office is lighted. Around this apartment, and communicating with it by doors behind the counter, are private offices for the officials, who have business most directly with the Public Office and Depository.

The Depository is enter* d through a short passage from the Public Office. The space within the walls measures 140 ft. by 85 ft., and the galleries, five innumber, together with the roof and their supports, are constructed chiefly of wrought iron. The ground floor is flagged over the arches of the basement. Transversely the building is divided into three nearly equal spaces. The centre, being open from the ground up, is used for lighting from the roof and end, for galleries of communication, and for a staircase. The side divisions are each again divided longitudinally into ten compartments, each fitted with 114 ft. lineal of shelving. A conception may be formed of the accommodation afforded, from the computation that the superficial area of shelving will amount to 2.2 acres statute. The shelves will be formed of limber, it being deemed sufficiently fireproof for the purpose of storing papers, as paper itself is known to be a deterrent, under certain circumstances, to the spread of fire. The construction throughout the Repository is calculated to be fireproof.

The floors of the galleries are formed of open ironwork. The galleries of communication are supported by ornamental cast-iron brackets projected from the columns, and are protected by a light railing, with oak handrail, carried around the entire area at each floor. At intervals are desks, for the accommodation of the record-keepers and clerks.

The roof is formed of slates, except to the middle division, which is glazed, on stout rolled iron bars, the whole sustained by wrought-iron trussed principals, springing from columns which are carried up in direct series from the ground-floor. The general character of the internal fittings has been borrowed from the fittings of the book-rooms adjoining the reading-rooms in the British Museum. The walls throughout are faced with granite ashlar, the public department having a more ornate character bestowed on its openings than has the Depository.

The design is Classic, and is rather chaste than decorative ; the character is Roman, the porch having a Doric order. The walls to the ground-floor are rusticated, and a string is carried round the level of the porch cornice. The windows of the fir.st-floor are pedimented and surrounded with a double-faced architrave ; those of the second or upper floor being square, and surrounded with an architrave. The whole is crowned with an entablature and blocking. Plain, yet elegant, chimneys spring from the roof.

The Depository is different in treatment, yet in full accordance, and especially to be commended for the truthfulness with which it tells its story. The windows are large, being designed for the admission of abundance of light.